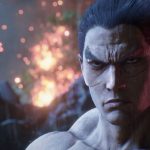 You are reading
Tekken 8 Leads Of State of Play

The trailer for Bandai Namco’s next entry featured series mainstays, Jin Kazama and Kazuya Mishima, sparring in the middle of a storm. Shipwrecks dotted the background, and thunder cracked overhead. This match had actual gameplay, in addition, to slow-motion moments where each fighter landed knockdown hits and Jin.

Jin pulled out an extremely powerful attack to end the trailer, sprouting a black wing and sending Kazuya to the ground.

Kazuya may seem familiar outside of Tekken’s fan base. He was one of the last DLC characters for Super Smash Bros. Ultimate and appeared in multiple other crossover projects.

Tekken 8 will be the first numbered entry in the fighting-game series since Tekken 7 in 2015. Between then and now, a handful of non-mainline entries came out, including a Pokémon spinoff called Pokken Tournament.

Before then, Tekken has been a focal point of the fighting-game genre since its original release in 1994. If Tekken 8 launches in 2024, that could mark a 30-year gap between the series’ beginning and its newest release.

Tekken 8 does not have a release window of any kind, just a request to “Stay Tuned”