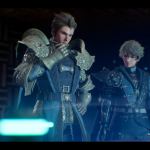 You are reading
The Diofield Chronicle – Review

The Diofield Chronicle is Square Enix’s latest strategy role-playing game for PC and home consoles. After the demo earlier this year, I was tentatively excited, but now I’ve played it in its entirety. This real-time tactics RPG combines RTS-lite game play with a party-based tactics game. Then throws in a story that’s rife with geopolitical and interpersonal conflict. However, a lack of polish actively tears through this game’s physicality. Arm yourself for the battle that awaits, mercenary. Let’s dive into The Diofield Chronicle. 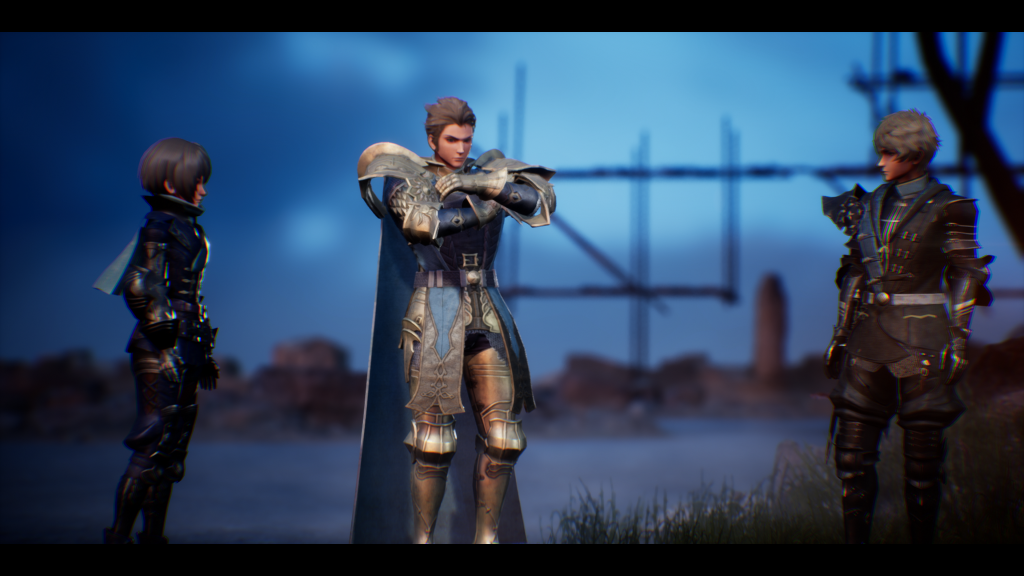 A War Brought to Diofield

The island of Diofield is home to the Kingdom of Alletain. A conflict between the Rowetale Alliance and the Trovelt-Schoevian Empire rages on the continent to the East. A mercenary group called the Blue Foxes defends Alletain and its precious resources from both the Alliance and the Empire. However, the Blue Foxes are not immune to their own personal squabbles and internal conflicts.

I found the story and characters in The Diofield Chronicle to be a bit of a paper tiger. Both are intriguing on the surface, but dig a little deeper and their gilded, bombastic nature presents itself.

Early on, I felt like I was in for a deep, philosophical strategy RPG with complex characters and nuanced perspectives on geopolitical conflicts. However, it left me with markedly forgettable antagonists, one-note motives, and almost entirely unlikable protagonists. To be frank, the only redeemable qualities I can think of are the fan-service moments between characters and the military-like strategic planning during mission briefings.

What The Diofield Chronicle ultimately fails to do is effectively communicate its story and create characters we can empathize with despite some questionable motives and decisions. I can tell that was the idea behind the game, but it didn’t come together in the final product.

The game tells most of the story, including the premise, through narrated scenes. The game presents a character via a portrait and a narrator simply explains their actions. It’s completely fine in theory, in fact, I’ve seen it done well in other games (i.e., Triangle Strategy). But we never really get to see the antagonists confer on the continent. This makes most of the enemies feel like cannon-fodder, and ultimately meaningless. 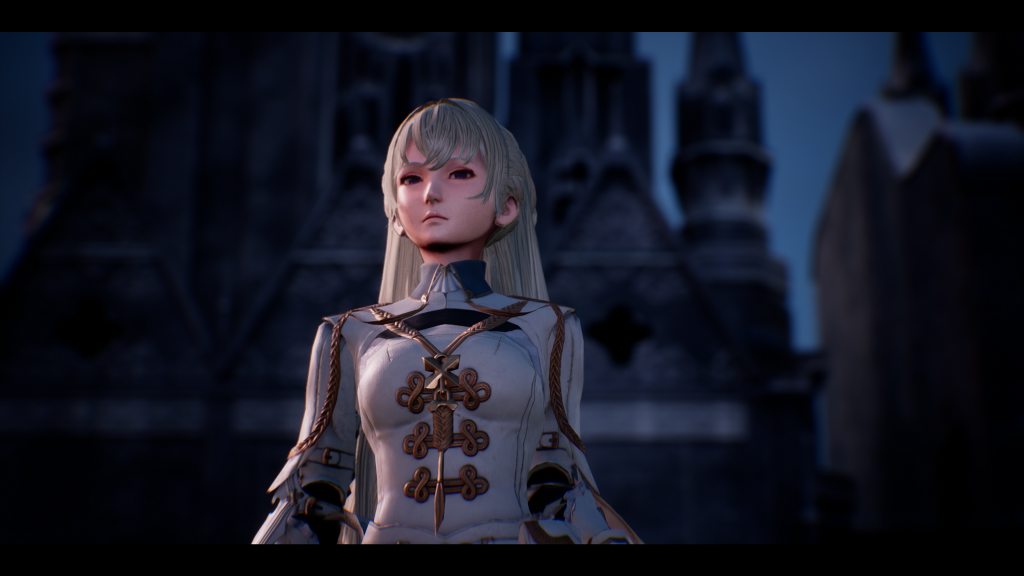 The DioField Chronicle Fights with Itself

Instead of compelling antagonists with dastardly motives, the Blue Fox’s internal conflicts take center stage. This creates avenues for nuanced political opinions for the team to debate. However, the game doesn’t explore nearly any of these thoroughly enough to illicit any real feelings. Each feels like vertical slices of political caricatures that often crumble at even the slightest pushback.

Not to mention the main characters have unbelievably laughable names. The characters often abbreviate each other’s names due to them being completely laborious to repeat. My personal favorite character is probably the main offender with the name Iscarion Colchester. In which they abbreviate to Isca… you read that correctly. It’s not a typo.

Additionally, I experienced a persistent issue where one button press often counted as two. This resulted in the game skipping entire lines of dialog. At first, I blamed myself. Then I blamed my controller. But I tested my controller in several other games, and I deduced that it’s something I only experienced while playing The Diofield Chronicle. It happened enough that it became more and more difficult to care about the story and the characters.

Overall, I think the narrative in The Diofield Chronicle has potential. But the unpolished overall experience bled into how the game tells its story. Unfortunately, I can say the same for the gameplay. Albeit, to a lesser degree. 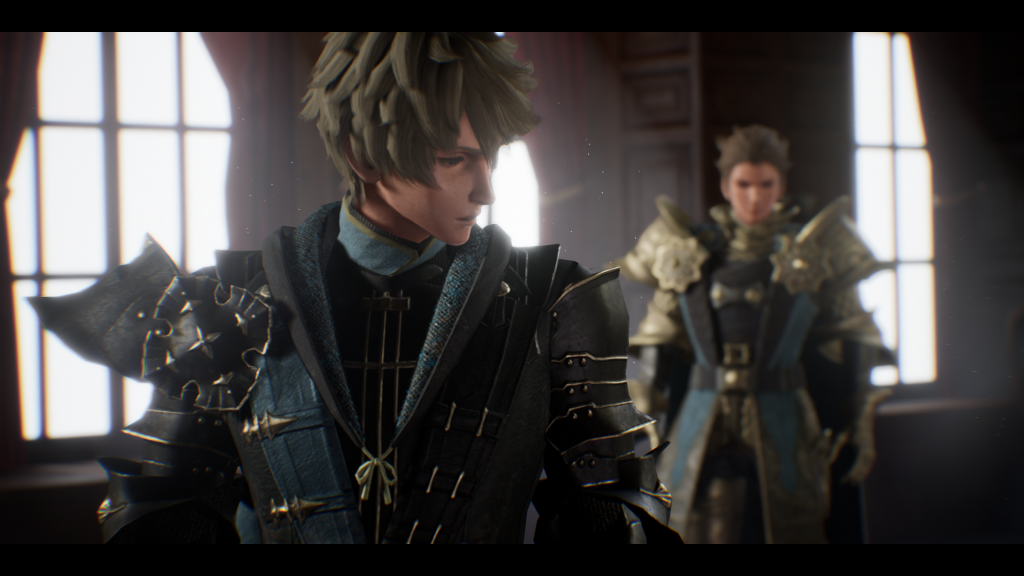 The Diofield Chronicle’s gameplay is its saving grace. However, that comes with some caveats. This strategy RPG combines the fun of a party-based role-playing game with the franticness of a real-time strategy game. “Active-tactics” feels like a good way to describe the minute-to-minute gameplay, and I think this is where The Diofield Chronicle shines brightest.

Chaining together attacks between party members to take out the opposing forces is engaging and incredibly satisfying. The animations for the character’s moves and summons are really cool. But they do get a little old over the course of the game. I would like to add that it was cool to see some Final Fantasy DNA in The Diofield Chronicle via the summons. It makes me wonder if the games are somehow connected, but that’s a discussion for another time.

Despite the gameplay sporting the best aspects of the game, it has difficulty scaling issues. The further I got into the game; the missions felt like they were getting easier. Albeit with a few odd spikes in difficulty. By the end of the game, I was clearing missions with ease, and it grew increasingly repetitive. It’s a shame because even the best aspect of The Diofield Chronicle isn’t safe from the undercooked feel that permeates throughout the experience. 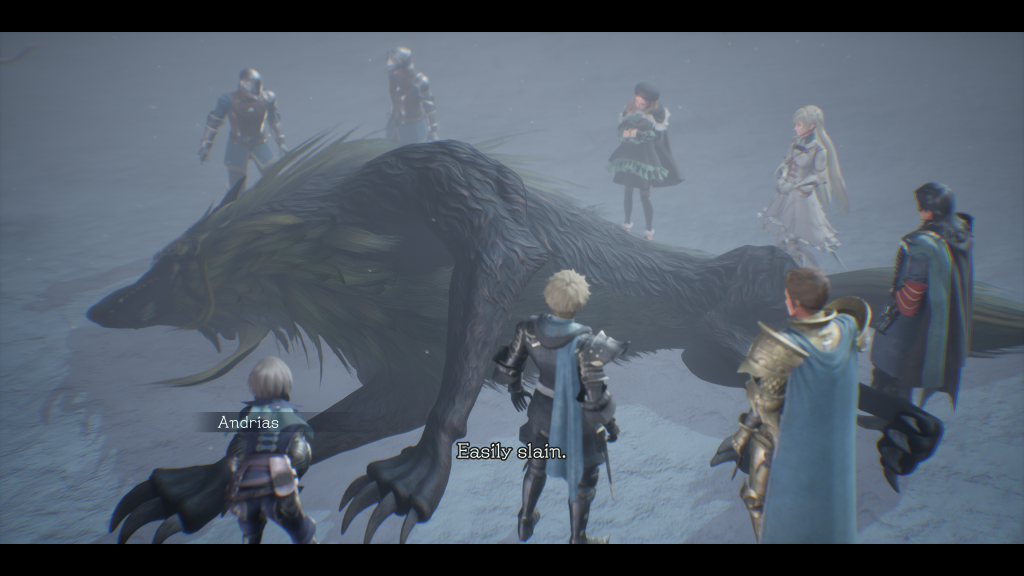 Here For the Party

Although, I did enjoy managing my party between missions at Elm Camp. This base of operations acts as a hub space. Here, the player can edit their party, manage weapons and held items, upgrade skills and summons, and talk to fellow Blue Foxes. The hub is surprisingly empty, and hardly feels lived in, but it serves its purpose. I feel like with a little more time in development, Square Enix could have made Elm Camp a more interesting place to spend time. Additionally, you can take on side missions, which often were tasks for other Blue Foxes.

I did encounter weird inconsistencies between the story and gameplay. I’d go out on an expedition with two particular characters, we’d get ambushed, and then it would show the whole party as present. However, the game made me remove characters from the party that shouldn’t be narratively present before starting the battle. It was a little confusing and not ideal. It’s a small nitpick, but something that I think is another indicator of the rushed-to-market feel The Diofield Chronicle exudes. 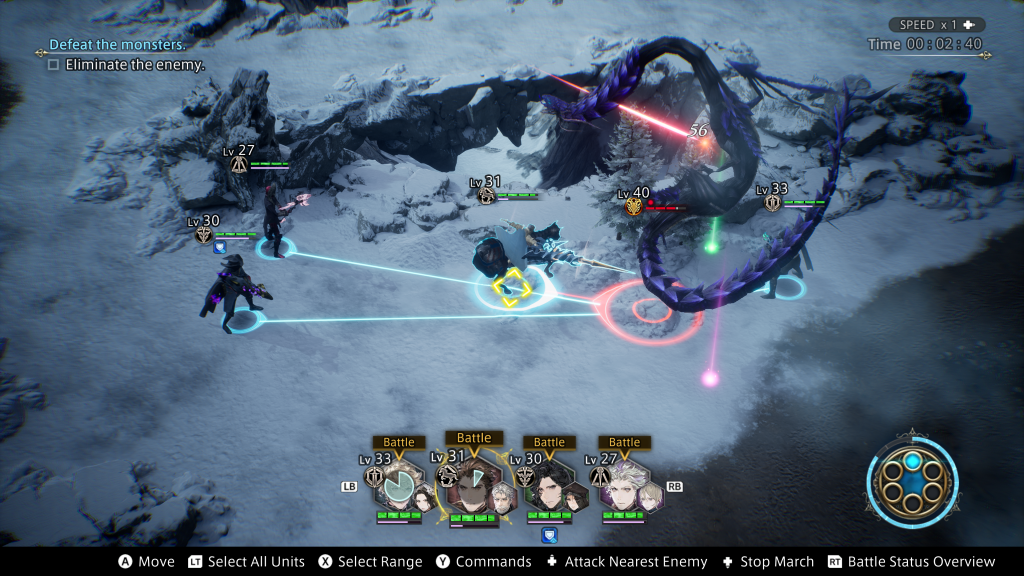 The Diofield Chronicle is Beautifully Bland

The Diofield Chronicle is a pretty game. But its art style is a bit confusing and simplistic at times. However, given the traces of Final Fantasy DNA, the oddly futuristic look to the medieval-esque aesthetic is forgivable. The armor sported by the protagonists is sharp and elegant. It’s sure to be replicated by cosplayers, as The Diofield Chronicle has plenty of characters with different looks to glean inspiration from.

The more cinematic cutscenes look nice and the lighting effects during the mission briefings are a nice touch. However, the environments feel barren and simplistic. This aids in readability for the top-down view, but I can’t help but think it’s a bit too simple. Particularly when you explore the hub space. However, the larger enemy designs are great, and seeing them on the battlefield instills a bit of intimidation. 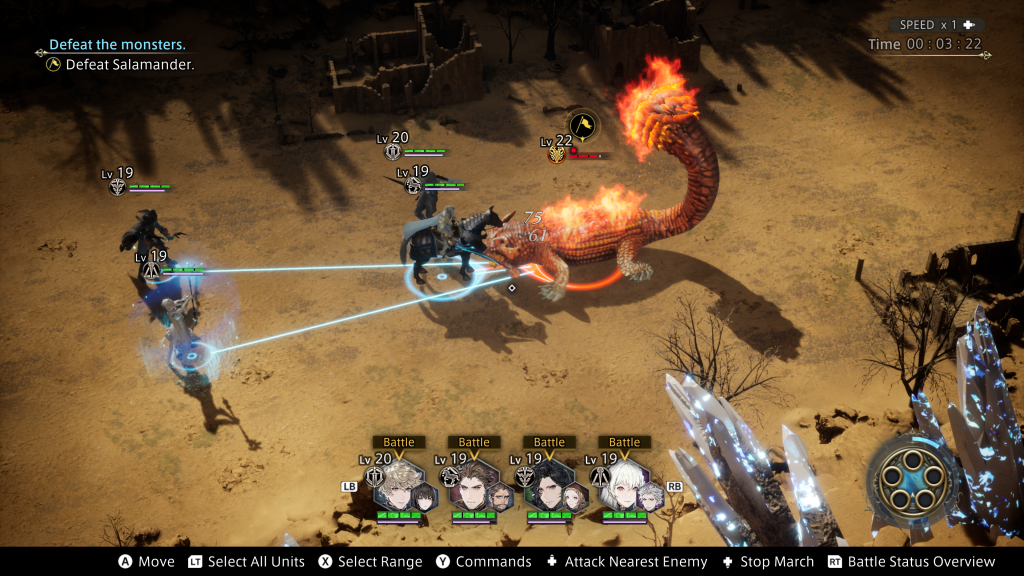 In terms of visuals and performance, the game runs fine. Albeit with some frame rate dips during more intense animations. However, you can opt to render the game in 1080p to reduce this issue. I mostly played the game at 1080p in performance mode, but there’s also a 4K quality mode for those that don’t mind 30 frames per second.

I noticed that the game defaults to 1080p, which for the most part does hide the frame rate fluctuations. This is purely speculation, but I think that was done cleverly by the developers in an attempt to disguise any issues and present the game with a consistent flowing frame rate. 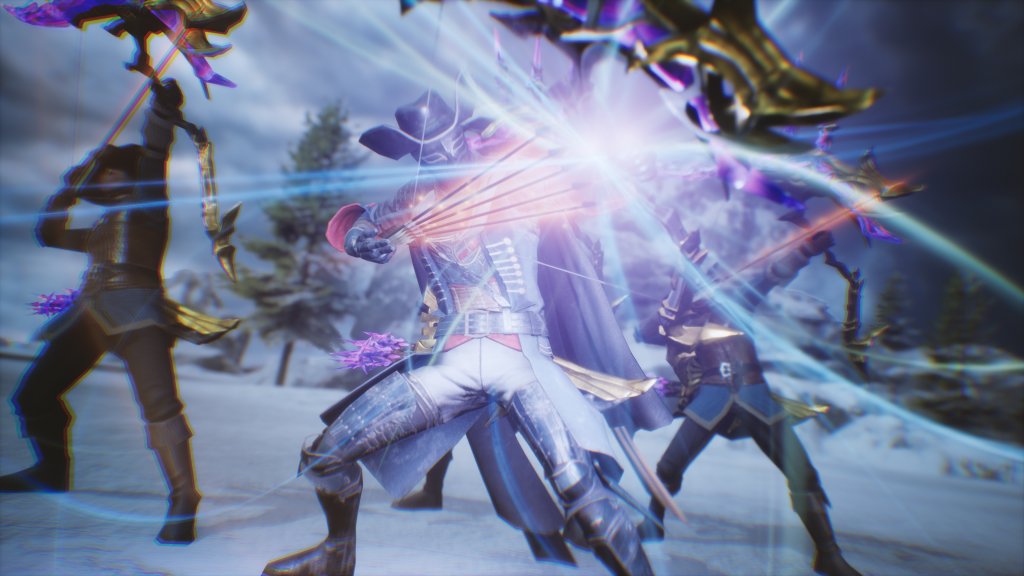 I don’t like being negative, but The Diofield Chronicle is rife with audio issues. Not only are lines of dialog repeated countless times during battles, but there are sound effects that play on repeat and noise issues that persist during dialog.

Occasionally, I experienced an audio issue where I’d return to the base and a weird spell sound effect would play on repeat. This got really annoying, and I’d have to save the game and relaunch the app to get it to stop. Considering it would only happen while I was at Elm Camp, customizing and upgrading the party, it couldn’t have been more inconvenient.

To be fair, the voice acting in The Diofield Chronicle is quite good. But there was a strange buzz that would fluctuate in volume between dialog that got a little distracting. It’s almost as if no noise reduction was done while mixing the audio, or it’s some weird bug that wasn’t squashed during quality assurance testing. 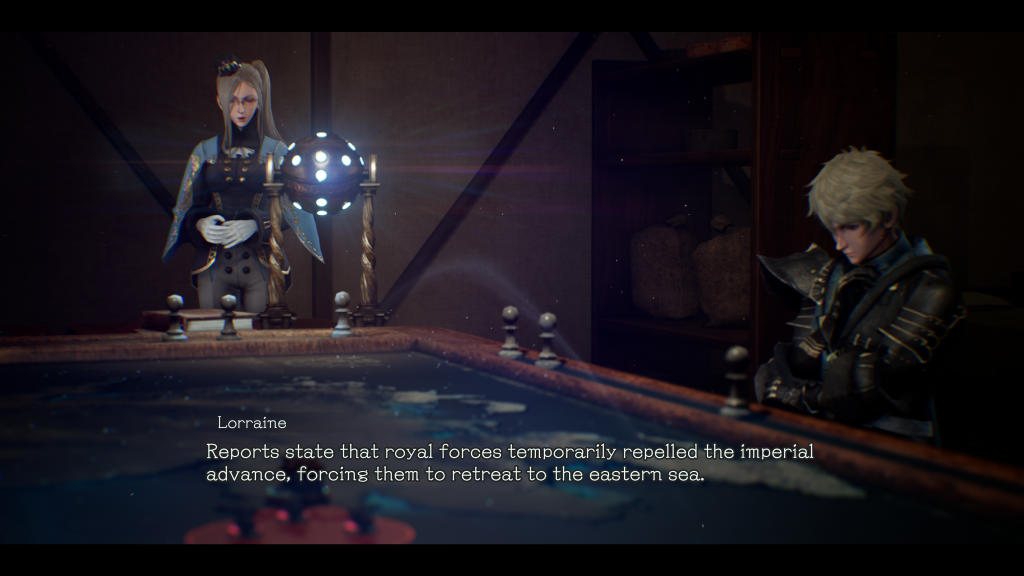 Final Thoughts on The Diofield Chronicle

Despite its issues, there was an intrinsic level of fun that carried me through the game. I believe that within The Diofield Chronicle lives a certain potential for greatness that deserves to be brought to fruition. Unfortunately, Square Enix did not allow this game to fully gestate. 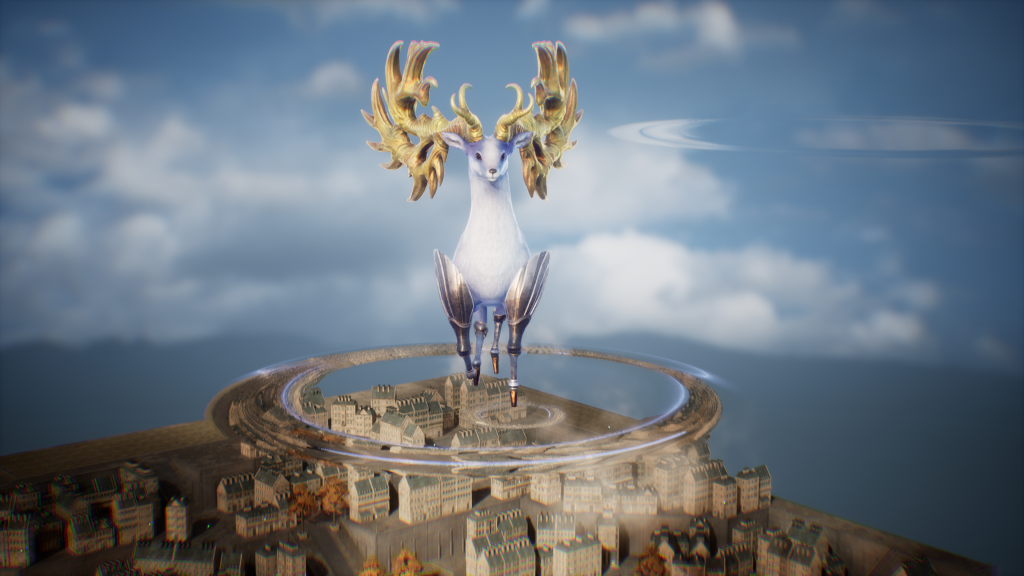 I look at Triangle Strategy as a game that does everything right that The Diofield Chronicle gets wrong. The story and characters aren’t inherently bad but are ultimately forgettable and uninteresting. The strategy gameplay is engaging and unique but fails to stick the landing. The visuals are pretty but simplistic and lack any sense of real identity. Not to mention the soundtrack and audio obscure good voice acting.

At its current price of $59.99 USD, The Diofield Chronicle is difficult to recommend. Personally, I would wait for a sale and lower my expectations. There’s so much about this game that feels unfinished. I was surprised that it was installed from the disc on Xbox Series X and in the time that I played it, not once did the game require an update. To be honest, I think Square Enix simply got the game out and I’d be surprised if it received any improvements in the future.

Have you played The Diofield Chronicle? Let us know what you think in the comments below!