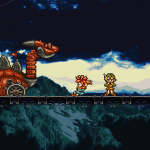 You are reading
PlayStation Classic Titles Announced: Solid, but Questionable

PlayStation has finally announced their lineup of 20 games that will be included with their release of the classic console. The original PlayStation is definitely something that many older gamers hold near-and-dear to their hearts because of the classics that they remember playing from times past. Some of these classics are ones that people still cannot get over to this day and continuously reminisce over such as Final Fantasy VII, or for me personally, Resident Evil 2. While the list is pretty solid as a whole, I cannot help but feel that certain titles are on the list in place of titles that SHOULD be on the list.

For starters, I don’t want to knock all of the games included, because, for the most part, I feel it is pretty solid. Twisted Metal, Metal Gear Solid, Battle Arena Toshinden, Jumping Flash & Syphon Filter are all games that make me immediately think of the PlayStation console of the 1990s. Synonymously, when I think of the console, these are games that do come to mind when I think of what I played as a kid of that era. Even some titles like Tekken 3, Wild Arms, Super Puzzle Fighter II Turbo and Oddworld: Abe’s Oddysee I find a hard time arguing being part of this listing due to the franchises and how prominent they were during this timeframe. Me personally I enjoy the inclusion of the original Grand Theft Auto because that was my first introduction to Rockstar and to see how far they have come with the franchise is amazing.

That being said I cannot deny that I feel that there are a few head-scratchers here, not because they are bad games but because they don’t make me think of PlayStation. I love the classic Rainbow Six games. Rogue Spear was my personal favorite that I used to spend hours on GameZone playing against others as one of my first introductions to online gaming. That being said I don’t know why this was included aside from the fact that the game is an icon of 90s gaming. I also find a hard time arguing for Resident Evil Directors Cut being here, however, with Resident Evil 2 releasing a remake in early 2019, I can understand why Capcom might not have signed off for this to be the title.

One thing that I find more so odd is no the games that are included as head-scratchers, but the games that did not make this list that SCREAM PlayStation. Rayman is a great franchise, but like Rainbow Six, I don’t think of the 90s PlayStation console when I see either. Personally, I wonder why that was chosen over another iconic PlayStation platformer like Tomba? Also missing from the list that I am not sure why would be the non-inclusions of MediEvil and Parappa The Rapper. Sir Daniel Fortesque and Parappa are two of my personal favorite gaming characters and when I think of either, I think of 90s PlayStation gaming. To see them absent means either someone dropped the ball when deciding on this list, or maybe reboots/remakes are incoming in the near future?

Why was this pink-haired icon not included?

Another questionable choice to me is Coolboarders 2. Sure it’s a good game, but is it really a better than choice than launch title ESPN Xtreme Games? Is Ridge Racer 4 a better choice than in-house developed Gran Turismo? Does anyone even remember the first Persona game compared to that of a choice like Suikoden II, ChronoTrigger, The Legend of Dragoon or hell even putting in Final Fantasy Tactics?

All-in-all it is hard to really just saying the list is bad because it’s not. Tekken 3 is probably the better choice for the series, and probably a better-included franchise than other options. It’s hard to not argue the decision to not include the dual-shocker controller to have titles such as Ape Escape able to be included. In the end, these are the classics and these are the chosen titles. I think it’s a solid list with a few question marks.

Are there any titles you wish to have seen on this list? Let us know below!