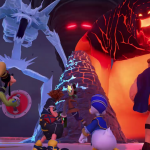 You are reading
Review: Kingdom Hearts 3

Kingdom Hearts III picks up after the events of Dream Drop Distance, where Riku passed his Mark of Mastery exam to officially become a Keyblade master and Sora failed, albeit due to the interference of Organization XIII. The two wielders, along with Mickey, Donald, Goofy, go out to find the remaining “Warriors of Light” to prepare for their fight against Master Xehanort’s thirteen darknesses. Further, Sora failed his exam because he fell too deep into the darkness to be able to get out on his own, and as a result, needs to regain his “Power of Waking.” Riku and Mickey go to the Darkworld and Radiant Garden to search for fallen Keyblade warriors, Terra, Ventus & Aqua, while Sora, Donald, and Goofy start looking for Roxas among Twilight Town and the various Disney worlds the series is widely known for.

The aforementioned Disney worlds capture their source movies, be it the tiny moments you have with Rapunzel in the Kingdom of Corona as she experiences more of the outside world, finally getting to fight all the Titans on Olympus, or even the novelty of becoming a toy to meet Woody and Buzz in Toy Box. Once you land on a new Disney world, it sucks the player in, making them feel as though they’re watching the source movie (which is ironic, given that neither of the Pixar worlds or San Fransokyo follows their source plot) due in part to a combination of beautiful adaptations of the films, the compelling stories themselves and the worlds they happen in. Also, while most of the Disney voice actors are the original actor/actress from the film, there are some performances that I mistakenly took for the original actor/actress because of how good they were. If that’s not a grand commendation for this talent, then I don’t know what is. Unfortunately the same cannot be said for the overarching story; it is undoubtedly Kingdom Hearts III’s biggest weakness. While the various Disney worlds suck you in, the main story is bogged down with numerous cutscenes, especially in the first two worlds, which is compounded by poor voice acting and a need to retell the side games that released mostly between II & III. Fans of the series will be deeply sated with the appearances from past characters in these cutscenes, and the game does ensure that everyone who hasn’t played all the games is up to speed. Still, the fact the game even needs to recall so many other games is a testament to how convoluted & tangled the story became.

Conversely to the plot, these are the most fluid and powerful mechanics a Kingdom Hearts game has ever had. Sora can run up walls, perform stronger attacks the more he chains regular attacks together, coordinate attacks with his teammates, the list goes on and on. Kingdom Hearts III’s combat system is designed to make the player feel powerful and fluid from the get-go without needing to take away powers after the tutorials.

The days of a hard max of three active party members are gone. Not only will any given world’s party member always be on the battlefield (outside of plot-related restrictions), some worlds have two party members, bringing the total party count to five. Alongside them are, once again, summonable allies, this time called Links. All linkable characters are from Kingdom Hearts or Disney’s past, with the Meow Wow Dream Eater from Dream Drop Distance being the only non-Disney Link, and Wreck-it-Ralph being the only new Disney summon. Sora has far more versatility and power in this game by being able to switch between three Keyblades at any given time, casting magic while on the move, and summoning Disney World rides, like the Carousel, for him, Donald & Goofy to use to fight the countless enemies. A refined flowmotion system that lets him navigate the terrain with ease and zip to enemies in an instant. Whenever the player doesn’t want to fight Heartless, Nobodies or Unversed, they can find one of many minigames throughout most of the worlds. Twilight Town lets you make delicious recipes with Remy the Rat from Ratatouille, the 100 Acre Wood lets you help Rabbit gather his harvest, and scattered throughout the worlds are game & watch games that you can collect and play through the menu. Minigames bring an extra layer of childlike enjoyment to Kingdom Hearts III. That said, Gummi Ship travel is the only weak point. To be fair, traveling in the Gummi Ship now means flying through an open universe with asteroid fields and treasures and the such, so the developers deserve an ‘A’ for trying to revamp one the lesser aspects of the series. Unfortunately, Gummi Ship travel was clunkily executed with poor control schematics, and boss fights with unnecessary two-dimensionality. Each world has its own art style, modeled after its source Disney movie. Each world ranges from vibrant colors of the rainbow to despairingly darker tones as the story calls for it (example you go from the royal style of Mount Olympus to a besieged, darkened Thebes/Agora in Olympus). While worlds such as Olympus and Toy Box have very colorful and vibrant styles, worlds like The Caribbean have a realistic art style. To complement the world styles, different varieties of Heartless appear (most times exclusively to their world), yet the Nobodies and Unversed are more stylized after the main Organization member on that world. Where Corona has numerous Nobodies styled after Marluxia, called Reapers, Arendelle is populated with lightning Ninja Nobodies after Larxene. Graphically, this is not the familiar Kingdom Hearts engine. Instead of the familiar, in-house game engine that Square Enix has used for most other games in the series, Kingdom Hearts III uses the Unreal Engine. It’s a decent change, albeit a bit outdated. There are some truly beautiful moments in the game due in part to the Unreal Engine, and some great attention to detail (see above clip). The Festival of Lights in Corona is gorgeous, the Vault of Doors in Monstropolis is massive, and Arendelle has a beautiful cutscene for “Let it Go,” the best job Kingdom Hearts has ever done honoring Disney’s music. Finally, from a gameplay perspective, the areas only need to load in when you go to a completely different area (ie going from Thebes to Olympus). Instead of having numerous, smaller areas, there are generally two or three big areas in each world that seamlessly highlight when Sora and co. enter a different area. The only situation where the framerate started to noticeably drop was when there were literally thousands of objects on the field. That aside, this game ran beautifully. Finally, we have the most Jekyll & Hyde aspect of the game. Every world has its own scores for in and out of combat scenarios. Some are original compositions, made to fit their respective world or location within the world. There are at least three different scores for the three main areas of Olympus, with the eponymous area playing Kingdom Hearts’ traditional theme for this world. Other scores are based on iconic songs from their source material, so when walking around Toy Box, expect to hear that familiar, folksy tune of “You Got a Friend in Me.” Outside of the level bosses, many of the special fights use re-recorded versions of past Kingdom Hearts fight songs. On one hand, there is an argument to be made in support of more original songs for this final installment, especially since the ones they made for this game are fantastic, but on the other, the re-recorded versions of past ones are done very well. The quality of voice acting depends almost entirely on whether the character is from a Disney world or not. Whereas the Disney characters, mostly played by their original actors, bring the same life their characters had in the source movies that made them as beloved as they are, the main Kingdom Hearts characters have the opposite level of quality. The crux of the issue is the slow, awkward pacing that most of the main plot’s dialogue is delivered, making the scenes where they recount stories of past games even harder to watch and listen to.

Kingdom Hearts III was never going to have to worry about how successful its launch would be, its fans just had to worry about whether it would ever actually have a launch. Fans waited for 13 years and through numerous side games, but the wait finally ended on January 29th, 2019. They got exactly what they wanted: a Kingdom Hearts game with an incredible combat system that makes Sora feel stronger than ever before, the final piece that ties every loose end in the Kingdom Hearts saga, and the long-awaited arrival of Pixar inspired worlds. That this game released after over a decade of patience shows how widely respected it is in the gaming community. Writer’s note: This copy of Kingdom Hearts III was played on the standard Xbox One. All screenshots and clips shown were captured during gameplay for this review.
8
While not a perfect game, Kingdom Hearts III is the game that its die hard fans have waited 13 years for.