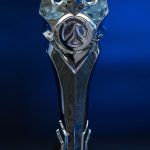 The stage is set. Five weeks after Gritty led the Philadelphia Fusion out to their season kickoff match against London, the Stage One Playoff field is now locked in stone. See below for the final standings of Stage One:

Heading into the Playoffs, the Vancouver Titans have supplanted the NYXL as the top team to beat, while Seoul and Boston snuck in at the last second to nab the last two spots (albeit Seoul is tied with San Francisco). While the above picture shows some pretty obvious winners, there are some this picture doesn’t show. Let’s analyze!

Anyone who follows OWL online will know that they do a weekly top 5 plays of the match. Even though Muma had an amazing Earthshatter on King’s Row, it didn’t lead to the win they needed. On the other hand, the Fusion came together to save their Carpe and win a team fight early on, also in King’s Row (I swear there isn’t an intended pattern building here). This week’s title goes to Dogman from the Reign. In a do or die match, Dogman, playing as Ana in an uncommon turn of events this Stage, led the charge towards a full squad wipe on Rialto to win the map, the match, and take a playoff spot.

Writer’s note: There will be a playoff preview coming before the matches this week. Stay tuned!