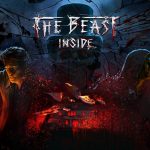 You are reading
Surviving Impressions of The Beast Inside

The Beast Inside is a survival horror game that started as a Kickstarter and has grown into something awesome.

Developed by Illusion Ray Studio, and published by PlayWay, the demo is currently available on Steam. You play as a Cryptanalyst that is trying to resolve a hundred-year-old murder that remains unresolved. The demo includes chapters 1 and 2 to help you get a feel for the game’s mechanics. 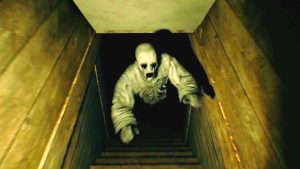 Usually, demos can be a little rough. Which is understandable because it is an early release and sometimes are released as a test for developers to make much-needed changes and fix any bugs that may come up. However, with The Beast Inside, I have to say it is the cleanest demo I have probably ever played. I ran into little to no bugs while playing and enjoyed every second of the demo so much that I did not want it to end.

The story is interesting and leaves you on edge, constantly wanting to know what is happening. Chapter 1 starts with a scene of a character moving into the house that the story is based in. You are moving boxes into the attic until you stumble upon a baseboard that is slightly raised. After prying open the board with a crowbar, you find a box that requires solving a puzzle to access. Once the box is opened, you find a key and an old journal. 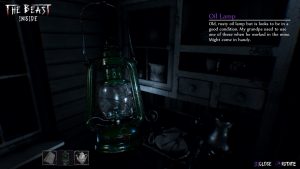 This leads you into chapter 2. Which almost seamlessly transitions your character into the owner of the journal writing in it. This is where things get interesting. You must find matches and light candles around the house before it gets too dark. Loud noises and strange occurrences start to happen around the house such as ghostly figures appearing, footsteps, and bangs like furniture being thrown around.

Of course, like most horror games and films, the main character wants to investigate. At this point, the only source of light you have are matches and a lantern. The matches burn close to real-time and the lantern requires fuel which is harder to find if you are not much of a searcher. I don’t want to give away too much of what happens in the demo for those who want to play it, but it is worth the download. 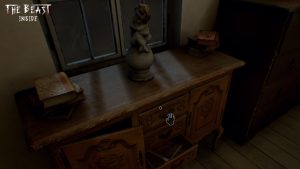 Almost everything in the demo can be interacted with. You can open every drawer, pick up almost every object, and move a lot of larger furniture. I was even surprised that when moving some furniture, it makes a sound like it is scraping along hardwood floors if it is being dragged. A ton of detail was put into this game and really made me feel immersed. I am not a fan of jump scares, but the ones that were in this demo were tasteful and not your typical “loud noise in your face” type of scare.

Overall, this demo is worth playing. I really hope that the developers stick to the setting that they have so far and improve upon it even more. I personally would not change anything about the mechanics or the setting as I feel like it adds to the urgency and thrill of the game. Very impressed with it so far and I will definitely be purchasing it once it fully releases.