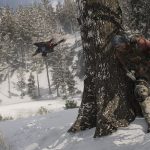 Ubisoft did a live stream to the world premiere of its new game, Tom Clancy’s Ghost Recon: Breakpoint.

This game takes place on an island called Aurora.

The game’s backstory revolves around Jace Skell, owner of Skell Technologies, and developer of an AI created to repair humanity and simplify life. We are now to the point where Skell has started to weaponize the AI and placed it onto drones and other machinery.

Jace is an accomplished engineer who created this location to test out the AI and drones safely. This island turns deadly when someone takes over control of it. The UN decides to step in after failed attempts to contact Skell on Aurora island. The Ghosts are then sent in to clarify the situation. When the Ghosts get to the island we learn it is taken over by a group of spec ops soldiers just like yourself (in the video, they state that they went “Rogue”), they are called the Wolves.

You play as a person called Nomad. You are thrown into the middle of Aurora with nothing.

The game features some new technology that is changing the course of Ghost Recon.

Aurora is an open world experience with multiple locations and terrain. From snowy land to lush forests to deserts, varied terrain is there to be explored.

You can play solo or 4 player co-op.

Players experience body damage depending on how hurt you are with three stages of injury. Stage one is called limping and causes reduced stamina. Stage two is bleeding and introduces difficulty when aiming. Lastly, stage three, the player slows down and can barely move and has only a handgun to use in combat.

Terrain sliding brings a new dimension to traversal, similar to Apex Legends. You can move through the world on air, land or sea with military vehicles.

A new ability called Camo Prone allows you to hide to get a jump on enemies or hide to find another way.

Bivouac locations so that you can heal, rest and also modify your gear. These locations are hidden around the world.

Hide bodies or move other Ghosts to be healed later.

Multiple class options are planned for launch and changeable at the bivouac.

The community has had a huge point in helping develop the game and helped to evolve it.

New enemies have been created to be used in a very interesting matter. The normal rusher class, the heavy armor class, rocket launcher class to name a few.

Improved AI of the NPC’s to help to locate you and roaming patrols around the world to fight you.

The weapons will have multiple options to allow you to change the feel and abilities they perform.

A large amount of player customization.

The same character you play is shared across PvP and PvE.

PvP enabled at launch with more info coming at GamesCon later this fall.

After launch new content is coming out every 4 months, this includes Raids and locations with the first raid location revealed to take place in a volcano.

My personal thoughts on this version of the game are very mixed. It feels like Division 2 and Ghost Recon: Wildlands. It is almost to the point where Ubisoft feels like they are fighting themselves in the same type of game. The only difference between the two games is going to be the loot drops. In Wildlands, you would get an item and you would have it forever and they were all the same. In Division, you had to fight to get another weapon with better stats. The replayability of Breakpoint might not be there and just a temp revisit ever so often. The Ghost Recon games are known for great stories, and I hope for them to continue to push that. I will more than likely be playing this game and give a better update when completed.