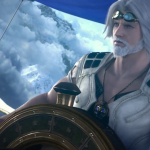 You are reading
Final Fantasy Live-Action TV Series In Development

A Final Fantasy live-action TV series is currently under development at Sony Pictures Television. Adding to the long listing of games-to-television shows, the development is still in early stages. SquareEnix is also assisting in the development process, which makes sense being the developer of the popular franchise. Hivemind, the production studio behind Netflix upcoming The Witcher show, will also have a part in Final Fantasy’s production.

Jason F. Brown, Sean Daniel, and Dinesh Shamdasani of Hivemind will join the production for Final Fantasy. The show writers have Ben Lustig and Jake Thornton and also serve as executive producers.

The series looks to take place in Eorzea, the setting to the MMORPG Final Fantasy XIV. It will follow Cid in a world that is battling a “struggle between magic and technology.” The typical Final Fantasy world will have chocobos to airships and magitek to beastmen. The story is being written specifically for the TV show.

For Final Fantasy to be receiving a show should be a surprise to no one. The series has a 30-year history with fans and spin-off movies and animated shows. In March 2020, SquareEnix plans to release one the most popular entrants to the series with Final Fantasy VII Remake. The show will continue the trend of games moving to brand spinoffs in TV shows. Netflix has The Witcher slated to release in the Fall and a Halo show has been in production with Showtime since 2016.