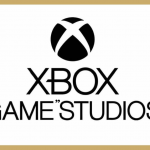 You are reading
Microsoft is Failing as a 1st Party

At E3 this year, Microsoft showed off fourteen first-party games and gave preliminary details on their newest console, Project Scarlett. Project Scarlett will be Microsoft’s fourth console since the launch of the Original Xbox in 2001. Over the course of those eighteen years, Microsoft has struggled to create enduring franchises beyond the title that launched them into the console space, Halo. Over the course of the last two weeks, I’ve performed an in-depth look at Microsoft as a first-party publisher and the games and franchises they have created and failed to create. This analysis comes with a number of qualifiers, so I will lay them out here at the top.

With that in mind, let’s check out the numbers.

Microsoft currently has six active franchises. I bet if you think hard you can get most of them. They are:

Killer Instinct qualifies only by counting each seasonal release as a separate title. This is compared to Sony with nine(MLB The Show, Ratchet and Clank, Uncharted, Until Dawn, Gran Turismo, Wipeout, Jak and Daxter, God of War, and SingStar), and a whopping eighteen for Nintendo, which I will not list here. Of these franchises, none of them began on the Xbox One, though more on that below. The reboot of Killer Instinct is the only one approaching being an Xbox One franchise considering the original game was published in 1994 in arcades.

Now, you may say that having three games in a single new franchise on a single console is excessive. To that effect, we can look at game franchises that launched on Xbox One, but have only received a single sequel. In this category, Xbox One has only two titles: Ori and Dead Rising. Ori and the Will of the Wisps, the sequel to Ori and the Blind Forest is launching later this year. The other title is a bit of a cheat. Dead Rising 3 and 4 were published by Microsoft on Xbox One, though obviously these are later games in an existing franchise. The previous entries were published by Capcom, which is why only the two newest titles appear here. So, in the purest definition, Ori is the only new IP to launch on Xbox One that has been deemed worthy of receiving a sequel. That’s a problem.

The New and the Old

The Xbox One has been a disaster for Microsoft building new IP, but let’s see how much of a drop off it has been from the Xbox 360 in terms of their portfolio. 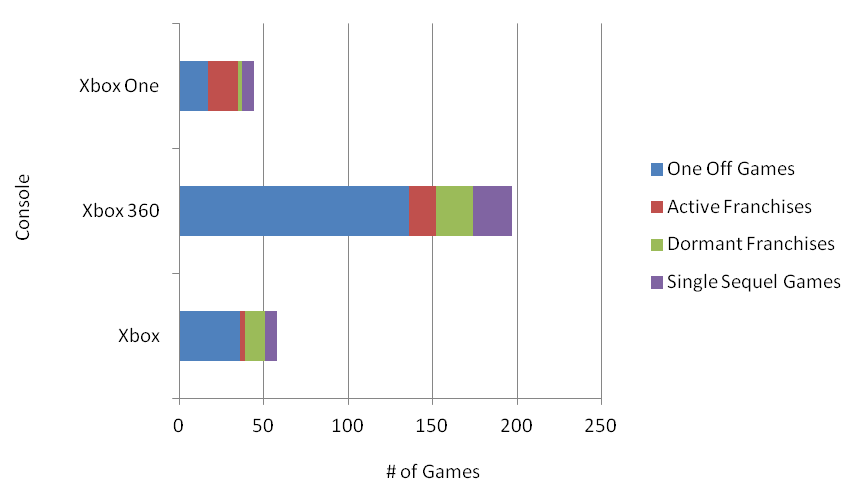 Not only are the number of titles lower, but so too are the number of titles not related to an active franchise. 51% of the titles published by Microsoft on the Xbox One were part of the six franchises listed at the start of the article, which included four Halo titles in four years. That is an enormous amount of time and development resources. In the prior two generations, games with sequels or that were sequels only made up 26% and 17% on the Xbox 360 and Original Xbox respectively.

The list of reasons for this increased reliance on tried and true franchises is extensive. The longer development times of modern games, the shift in focus at the start of the generation from first-party games to entertainment and Kinect. No matter the reason, Microsoft has become increasingly reliant on a few tentpole franchises to hold the fort down. Even this reliance wouldn’t be so bad if Microsoft was trying to get new IP to stick with the audience. Yet, in the last two years, Microsoft has published or will publish before the end of the year, only six games. Sony published twenty-seven. 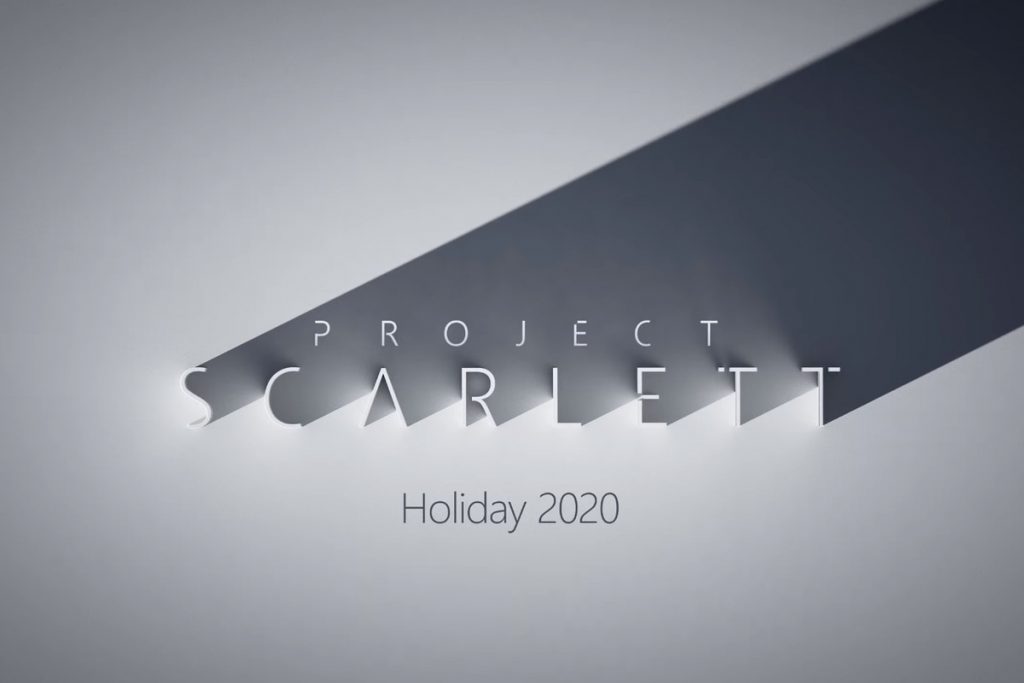 This generation there were seventeen new IP first-party games that did not receive a sequel, including titles like Ryse: Son of Rome and Sunset Overdrive. Sequels in the modern age typically take between 2-3 years for a single team. In the last three years, Microsoft has published Disneyland Adventures, PlayerUnknown’s Battlegrounds (PUBG), Rush: A Disney Pixar Adventure, Super Lucky’s Tale, and Sea of Thieves. Of these titles, PUBG is a second party game, that is unlikely to receive a sequel, and Sea of Thieves is a live game that has seen a fair level of recent success after a milquetoast launch. The long tail on that game is an encouraging sign, not one to be wary of, but its one of the few bright spots in the last two years.

On the whole, Microsoft has clearly been completely unable to develop new franchises in the modern generation. This may become less important with the advent of live games. The true test will be to see what happens with the launch of Project Scarlett. Will Microsoft’s current live game, Sea of Thieves see a sequel? Or a connected port? The answer remains to be seen.

The problem with Microsoft is not just the number of games, but the studios. Microsoft’s first-party currently owns and operates thirteen studios. Rare is the only one of these studios that have created more than one franchise. Undead Labs is the only other study with a current franchise, State of Decay, in active development that it has created. Turn 10 and Playground Games have been stalwarts as the developers of Forza Motorsport and Forza Horizon respectively. The Coalition and 343 Industries picked up franchises that were created and curated by other established studios, Epic and Bungie. The studios which created franchises or games with single sequels, Bungie and Twisted Pixel, spun off and became independent, while Lionhead and Ensemble were both shuttered. So what is Microsoft to do? 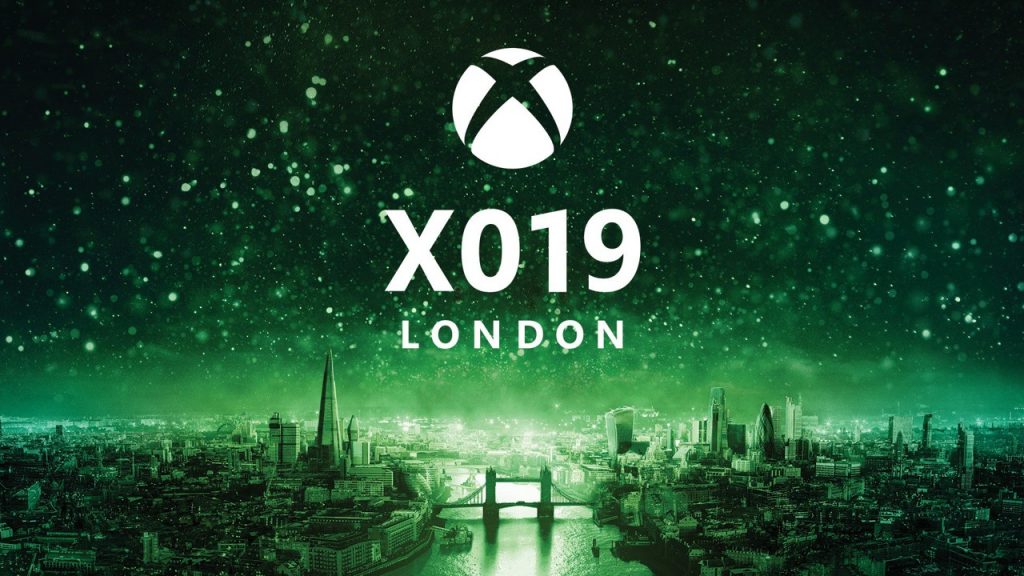 London is in Playground Games back yard. Might we see an official unveil of their Fable project there?

They don’t have the kind of prestige developer with a lengthy history of pumping out hit after hit the way Sony has with Naughty Dog, Team Ico, or Sony Santa Monica. Rare is the only studio still around with a pedigree that extends beyond a single-game franchise. Playground Games has staffed up, presumably to take rescue the Fable franchise after years of mismanagement (Fable Legends, Fable Heroes, Fable Pub Games, etc…) and then dormancy after Microsoft killed Lionhead in 2016. Are they equipped to take on a project like this? Or will this become the new Black or The Club: a game outside of a respected racing studios wheelhouse (pun intended) that ended up as a colossal flop? Until the game is shown, potentially at Microsoft’s XO19 event later this year in London, we really have no way to know.

Microsoft has not shown the capability to foster and hold on to homegrown talent. The Coalition was originally working on an original IP with the codename Shangheist when they were still known as Black Tusk. Microsoft shuttered the project when they purchased the Gears of War IP from Epic. The teams at the Coalition and 343 are incredibly talented. The Halo and Gears franchises are in good hands, but that ties those hands from developing new IP. So that leaves all the new studios. Microsoft went on a purchasing spree for the last two years. This meant adding seven established studios and launching a new studio, The Initiative.

The fruits of these purchases were first seen at E3 with the announcement of Bleeding Edge from Ninja Theory. Gamers shouldn’t expect to see anything from the other studios until Microsoft does a complete unveiling of Project Scarlett next year. The launch window for the new console may set the tone for years to come. Yet, in looking at the first two years after the launch of all three consoles we see a disturbing trend. The Original Xbox produced nine games that had one or more sequels. The Xbox 360 produced six new IP that was followed up by at least one sequel. The Xbox One had two. This downward trend is not encouraging.

Nostalgia For the Future

Nintendo has thrived by engaging with player’s nostalgia. Microsoft’s first party doesn’t have the same cache to pull that off. The studios they have purchased don’t have the same kind of storied history as say, Rare, does. Obsidian’s most prominent games, Fallout: New Vegas and KOTOR 2: The Sith Lords, used IP which it doesn’t own. Ninja Theory made DmC for Capcom, and Heavenly Sword for Sony. So, what old games could Microsoft bring back that gamers would be excited about? Some games that come to mind are arcade flight game Crimson Skies, along with MechAssault, Perfect Dark, and Viva Pinata. The final title is Too Human. Too Human‘s sordid history may make it too toxic, but its recent app revival through backward compatibility is intriguing. It was pitched as an epic SciFi trilogy before the collapse of Silicon Knights. I wouldn’t mind seeing that trilogy conclude.

The End is the Beginning is the End

Everything is a cycle. Microsoft was on top of the world during the Xbox 360 life cycle. In the last seven years, they have fallen woefully behind. The important thing is that they recognize the issues they’ve had and correct them. Vice President of Gaming and current head of Xbox Phil Spencer claims they do. In a Kotaku interview published last week, Spencer acknowledged some of the struggles Microsoft first party has had with resources. He particularly focused on having to throttle development to meet targeted release dates. The new studios should help to alleviate some of these pressures, but the fact that new IP is not the top tier teams’ focus is bad for the publisher’s long-term health. If Naughty Dog was stuck making Jak and Daxter games since the PlayStation 2, they wouldn’t have been able to establish the Uncharted and Last of Us series.

Next year, Project Scarlett will launch with Halo Infinite as a launch title. It will be the most important launch title for an Xbox console since Halo: Combat Evolved in 2001. It and the titles surrounding it will determine the fate of the next console, and perhaps Microsoft’s entire place in the streaming future of xCloud and Stadia. Regardless, Microsoft will have to do a lot more to win gamers’ hearts and minds in the next generation.

Addendum: It was pointed out by helpful twitter user @BanjoBarrage that in an E3 2019 interview with Electric Playground a spokesperson from Obsidian confirmed that The Outer Worlds IP rights have been retained by the studio, not by publisher Private Division. This is excellent news for potential continued investment in the IP beyond this generation should it find success when it releases on October 25th, 2019