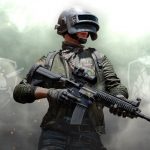 PlayerUnknown’s Battlegrounds (PUBG) is a title that took the competitive game world by storm. The battle-royale genre saw an immediate spike as this title and Fortnite took each other head-on for dominance on the market. While Fortnite won the battle, PUBG continues to maintain it’s steady player base and even viewership on streaming channels.

Today, PUBG Corp declared it will be forming a new studio called Striking Distance. This new studio is in charge of developing a new campaign based game in the PUBG Universe. This also came with the announcement that Sledgehammer Games co-founder, Glen Schofield, will be leading the new studio. Schofield has led previous titles from the Call of Duty franchise as well as Dead Space in prior roles.

Striking Distance is developing out of San Ramon, California. In a video on YouTube, and even on Twitter, Schofield described the ideas behind the new studio.

PUBG Corp previously has stated that they were looking to turn the popular game into its own brand. This is not an uncommon avenue for popular games either. In recent years games such as The Elder Scrolls and Fallout, even indie titles such as Minecraft and Ark: Survival Evolved, have turned into brands that include spinoff games and other media formats.

Looking to expand might also be the right decision for PUBG Corp, as the influx of battle royale-style games have increased. Apex Legends sneakily joined the battle royale when Respawn Entertainment released it prior to EA’s earnings call. Just over the past year, popular shooters such as Call of Duty and Battlefield have added this as modes. Bethesda even announced at this years E3 that a battle royale would be coming to Fallout 76. So as other developers join in, now might be a good time to dash out.