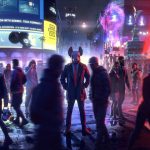 You are reading
We Are Legion, Watch Dogs: Legion Shown at E3

At the Ubisoft E3 Press Conference, the next iteration of the Watch Dogs franchise was revealed, titled Watch Dogs: Legion. Given the UK’s propensity towards mass surveillance and the upcoming Brexit, and you have a recipe for an politically charged look at the near future. The game features the leaked London location, and sees the hacking crew take to the streets to recruit citizens to their cause. A handheld device shows NPC traits, including background information that could prove valuable in a recruit. The most surprising part of the demo came when the player character died as a result of a car chase and altercation with the Ascendancy. The death was permanent, which gives some weight to the game play decisions. The player then took control of a different character from a list of recruits. This should help to differentiate Watch Dogs: Legion from its predecessors, and the bevy of other open world games available. Watch Dogs: Legion launches on_____ and impressions will be forthcoming here at E3.