This week on State of the Game, Community Manager Hamish Bode, with guests Chris Gansler (Community Developer) and  Bruce Kelly (Game Designer) talk about the future of Division 2 including Title Update 5, what happened in the PTS and where they are going to see the next patch. 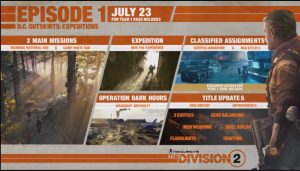 “Title Update Five is adding a lot of content including the new highly anticipated Raid Matchmaking and Difficulty. It will be highly interesting to see how this content will help or hurt the community in the long run. I myself am more excited to see all the other content that will be added. In addition to the new Content added at the end of the year when we come back to NYC’s Coney Island. The Skills are now going to be vialable. It will be highly confusing for me to use a skill build as I am not used to using them but I am exciting to see how they are in raid environments.”