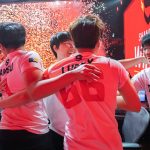 You are reading
The Shanghai Dragons and Everybody Else

This weekend, the Shanghai Dragons are the top of the world. Everyone knew this would be an amazing weekend, but nobody was expecting this type of history. There are so many winners within the Dragons organization that this isn’t a typical Winners and Losers article. Of course, we will address some losers, but we’ll get to that later. For now, it’s time to shower the Dragons with praise:

Winningest Dragons of the Weekend

Geguri and Diya: These two players fully get how important this weekend was. Geguri and Diya are the two remaining players from last season’s 0-40 team. Shanghai released eight of their eleven players in September, and Fearless transferred to a Dragons-affiliated team, CC. Just winning their first match this season brought Geguri to tears, so you know that she would be the first to rush the stage when her teammates took Map 7. Both players deserve every moment of this victory.

DDing: Get ready for DDing to jump into the MVP conversations. CoMa and Luffy gave DDing more than enough support for him to wreak havoc as Pharah. DDing led the charge against the NYXL and San Francisco Shock to take MVP honors in both matches. He is striking the iron at the perfect moment. The Dragons have the glory and are prepping to take Stage 4 by storm with DDing’s Pharah at the helm. Shanghai didn’t need a major patch to run the tables, so let’s see what they do when they get a major rule change.

Shanghai Dragons Org: This is a team that went through a major upheaval in the offseason. It made sense that most of the players and coaches were gone after last season, but they did not start this season as strongly as they wanted (3-4 in Stage 1). The team did make the Stage 2 Playoffs but immediately fell to the perfect Shock. Finally, this team could have been the fourth seed in these Stage Playoffs but had to win their last match just to get in. To win this championship, Shanghai had to beat the three best teams in the League, two of which were Stage Champions earlier this season. This was easily one of the most impressive championships runs in professional sports.

Top Tier Teams: The big three teams fell hard this weekend. New York couldn’t compete with Shanghai, and lost in the first round. Vancouver kept letting Twilight die, and then C9-ed on the last map. San Francisco was a map short from reverse sweeping Shanghai because of an ok push on the final map that Shanghai demolished. All three teams built their success on the GOATS meta this season, and they’re all about to lose it.

Atlantic Division: The difference between divisions is night and day. As mentioned before, the Atlantic Division had two playoff teams: New York and Houston. New York did not seem like a top seed against Shanghai, and Houston looked like a bottom-tier playoff team against Vancouver. Both teams combined for a -5 map differential and two losses on Thursday. Further, no Atlantic Division winner has won a Playoff Match this season. NYXL lost to Seoul in Stage One, London lost to Hangzhou in Stage Two, and the NYXL did it again this weekend. The Pacific Division has all the glory this season; hopefully, the Atlantic can be more competitive next.

Stage Format: Sadly, this is how the Stage format goes out. Blizzard announced how next season’s home and away games will work, and the Stage Format is gone. Stage Playoffs brought an extra air of excitement to the League for both seasons. Glory and rivalries were built off the format’s back. Most of the Shock-Titans rivalries was from their Stage Championship bouts. Upsets happened at every stage. This announcement needs a bigger dissection, but for now, let’s send the Stage Format off with the highest honors.