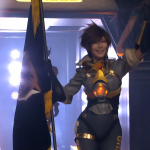 Stage Three is down to its final week. The “Green” Stage will move on throughout the playoffs as the Valiant and Houston both clinched spots. Further, teams officially locked down six playoff spots, but the seedings are pending this last week. This week, I get to eat my words, but also offer a forewarning to Stage Four. It’s time to get to all of that and more with this week’s winners and losers.

We are three-for-three on the green. Houston Outlaws and the Los Angeles Valiant have officially punched their tickets to the Stage Playoffs. Meanwhile, the Vancouver Titans clinched the Pacific division with a 6-1 record. What’s more for the Titans, the San Francisco Shock dropped a five-map match to the Chengdu Hunters. Even more, Vancouver can return to the top spot in the Stage Playoffs should either the Florida Mayhem or Toronto Defiant upset the NYXL next weekend in Atlanta. If both teams upset the XL then Houston will snatch the Atlantic Division crown from them. See? It is easy being green, even if you need ginormous upsets to hit the optimal seedings!

It’s time for me to eat my words. Look at the bottom, where I talked about the Homestand’s lack of more playoff caliber teams. Well, that was before we knew that two playoff spots and a division title would be decided this weekend. Also, how was I supposed to know that Bren and Dafran–sorry, Babybay–were going to duel in Widows? Also, a hammer only Torb 1v1 between Dafran and Mangachu? This deserves some programming awards! Forget that I didn’t expect the playoff picture to be incomplete by now, if Bren can find a Widow duel for the All-Star break, of course, he could get a Torb duel in Atlanta. In short, the Atlanta Homestand has a lot more than just OWL regular season matches happening, and I admit that I was wrong.

Stage 3 was rough for the Atlantic Division. Houston and the NYXL are the only teams in the Stage 3 Playoff picture and only Houston has a spot locked down. Philadelphia can still possibly sneak in with two wins next week, but they also need Shanghai to lose before the two teams face off. London showed they cannot keep up with the big teams this stage after getting swept by the XL, the Valiant, and the Shock this stage (albeit they did force the XL to five maps in the rematch). Paris let bad losses to Florida and a weak Boston team knock them out of Stage 3’s playoffs. New York and Houston aside, the Atlantic Division did not rise to the occasion this stage.

Last week, Seoul Dynasty tank, Fissure, announced his retirement from the Overwatch League, which Fissure followed up with a live stream. In that stream, he claimed Stage Four would introduce a role lock to the League. A role lock would force teams to only run 2-2-2 comps, so two damage characters, two tanks, and two support players. This is an obvious anti-GOATS move, but it has further reaching effects. Teams were always able to experiment with their compositions, bringing us true GOATS, GOATS offshoots, Dive comps, and Florida:

Who needs a tank? pic.twitter.com/C4uO6TAT45

Instead of continuing to build more diverse characters, the League is forcing its players to a strict format that you find in most professional sports. It takes away a unique concept the Overwatch League had. So enjoy your crazy team comps in this Atlanta Homestand, because it’ll probably be the last time you can.