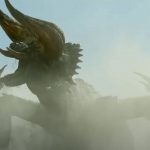 You are reading
Take a Look at the Monster Hunter Teaser

Monster Hunter was given a trailer this past week and new release date. The video game adaption will be coming to viewers in a few months.

In the trailer, viewers get a sneak peek at the Black Diablos, something Monster Hunter fans are well acquainted with. The movie was supposed come out on April 23rd, 2021. It was pushed up to December 2020. Take a look at the short trailer below.

If your unsure what this movie is about, here is the official synopsis from Sony Pictures.

When an unexpected sandstorm transports Captain Artemis (Milla Jovovich) and her unit (TI Harris, Meagan Good, Diego Boneta) to a new world, the soldiers are shocked to discover that this hostile and unknown environment is home to enormous and terrifying monsters immune to their firepower.

In their desperate battle for survival, the unit encounters the mysterious Hunter (Tony Jaa), whose unique skills allow him to stay one step ahead of the powerful creatures. As Artemis and Hunter slowly build trust, she discovers that he is part of a team led by the Admiral (Ron Perlman). Facing a danger so great it could threaten to destroy their world, the brave warriors combine their unique abilities to band together for the ultimate showdown.

Expect plenty of action when the movie is released later this year. It is nice to see a movie’s release date gets pushed up.

If you want to check out the game, each console has plenty of different versions to enjoy. The Nintendo Switch is getting some new Monster Hunter games. If you own an Xbox One, you can check out Monster Hunter World with an Xbox Game Pass subscription. Please take a minute to bookmark Lordsofgaming.net to get all your gaming news.