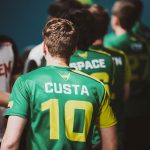 The 2019 season’s endgame is so close. This weekend was the last full weekend of Overwatch and the final statements for many teams. Some teams do still play next weekend, but teams like Atlanta and the LA Valiant made strong statements. All but one ticket is punched with potential movement within the seedings. Now let’s not get ahead of ourselves just yet, and let’s look at how we got here.

Atlanta and Guangzhou are Stage Four’s biggest winners. Guangzhou swept Dallas (and waited 20 minutes for a mouse issue to be fixed) to cement their 9th overall seed. Meanwhile, Atlanta ended Washington’s undefeated stage, 2-1, and swept London. Atlanta had a better stage than London and is ready to steal more from London. Atlanta has two matches next weekend against Dallas and Boston, and if they beat both, they’ll steal the 6th seed from London. These are huge turnarounds for teams that weren’t even in the Top 12 at the beginning of the Stage. Both Atlanta and Guangzhou started this stage at 9-12 and ran the tables to lock up their Top 12 spots. They brought the noise in Stage Four, now let’s see how much they’ll make during the Playoffs.

We seriously might see both LA teams in the Top 12. The Valiant did their job against Boston and won 3-1. Their bigger stroke of luck came courtesy of the San Francisco Shock. The Shock swept Chengdu, paving a much easier route to the play-in for the Valiant. Thanks to San Francisco, the Valiant only need to win once next weekend to snag the final play-in spot. Should the Valiant pull off a playoff appearance, then it will mark an excellent turnaround for a team that went winless in Stage One.

Today in sentences I’m shocked I have to write, Paris was the only team to have losing records in every stage this season. Paris’ individual stage records were (in order): 3-4, 2-5, 3-4, and 3-4. Florida picked up two wins this weekend to cap off a 4-3 Stage Four, Washington only lost to Atlanta this stage, and Toronto went 5-2 back in Stage One. These three teams may round out the bottom three of the overall 2019 season, but they can each claim at least one good stage. Never finishing over .500 is such a downer stat that Paris has to improve upon next season.

Next year’s Pacific East Division is ending this season poorly. Seoul and Shanghai both went from strong top 6 teams to disappointing top 12 teams. Seoul won a match, lost another and are now forced to survive the play-in after this stage. Shanghai started Stage Four as another top 6 team, but they’re 1-5 so far and barely kept their top 12 spot. Finally, despite Chengdu’s win against Houston, the Valiant might steal Chengdu’s top 12 spot if they win once next weekend. This could have been the one incoming division with full attendance in 2019’s postseason, but now they have to wait to see how the Valiant do next week.