You are reading
Grand Finals: The Road to Philly

One month later, and the Overwatch League has our Grand Finals matchup: San Francisco Shock and Vancouver Titans. Everyone expected the Shock to be a title contender back in February, but Vancouver? Not as much but still reasonable.

We’ll get into Sunday’s Championship bout, but for now, we have to recap the Playoffs. We’re looking at the biggest storylines out of the 2019 Playoffs, like how the Loser’s Bracket saved this matchup and the final farewell to the Blizzard Arena.

San Francisco and Atlanta gave us an instant classic in Week One of the Playoffs. Seven maps, back and forth, and an unofficial Stage Four Championship bout. Atlanta won that match, but that’s not the surprise. Here’s the surprise:

Moth’s face says it all: San Francisco blew it.

Now imagine that match without the Loser’s Bracket. A Grand Finals’ favorite would have been out Week One. This would have been an even bigger upset and choke than it already is. San Francisco didn’t wallow in pity, they got angry, and haven’t dropped a map since. London, Los Angeles (Gladiators), Hangzhou, and New York all fell to the Shock’s unbridled rage. San Francisco learned from their mistake, and they’re making damn sure it never happens again.

I Can’t Predict the Future

Do not ask me for betting advice, ever. For reference, here’s where I called most matches wrong (see bottom of the article), with this dubious quote:

“NYXL can’t get over their playoff curse.” 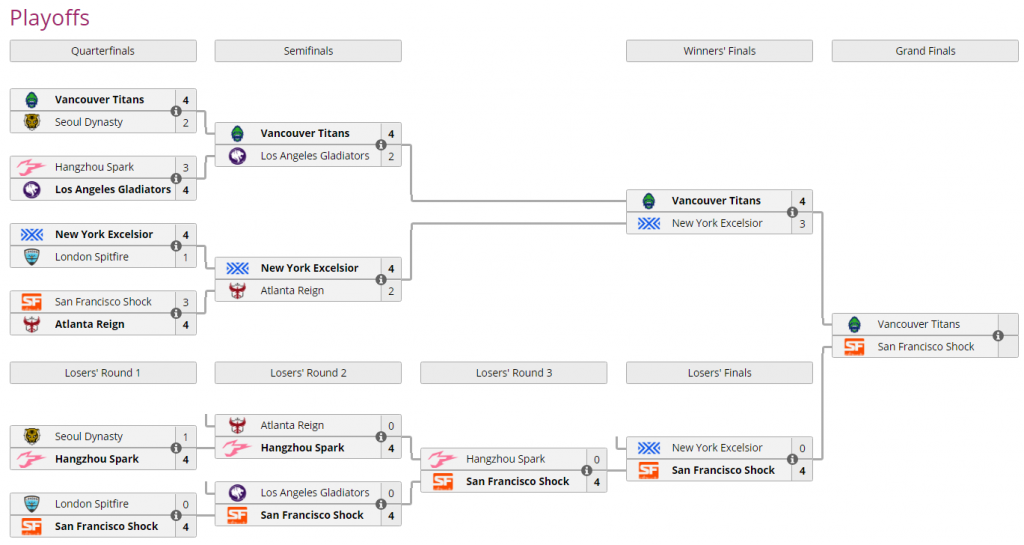 After losing in the first or second round of every Stage Playoff this year, the NYXL were one win away from the Grand Finals. London did exactly what I thought New York would, and went two-and-out. Speaking of which, neither Play-In team won a match, and couldn’t keep their Play-In momentum. This was the NYXL’s best showing all year, but they just couldn’t overcome the West Coast. Vancouver edged them out in seven maps, and the aforementioned San Francisco showed no mercy. Still, they can hold their heads up high for making more noise than some expected them.

Be honest, this is the only match-up fitting for the OWL Grand Finals. San Francisco Shock versus the Vancouver Titans is prime, Overwatch League content. We got this matchup four times so far, and the record is split down the middle. Each team won a Stage Championship matchup, a regular-season matchup, leading to a series map differential of 0. This is the best possible matchup we could ask for this season. Double elimination bracket filled with teams from both divisions meant a championship matchup we would never see in other professional sports.

There is one truth that I will keep: San Francisco over Vancouver. The Shock showed their resilience after failure and did so against marquee teams in these playoffs. I’ll admit this is going to be a long and close battle, but the extra year of Overwatch League experience will give the Shock the upper hand.