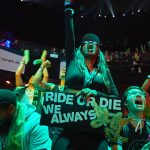 You are reading
Rivalry Weekend Winners and Losers

Rivalry Weekend officially wrapped up the Overwatch League’s 2019 Regular Season. This weekend saw everything from curb-stompings, to knock-down brawls, to lost bets. Most importantly, we saw the final efforts to move around in the Playoff Seedings. Here we are, the final standings for the 2019 season:

The top six teams get this weekend off, and the next six teams will compete this weekend for the last two playoff spots. You can find our rundown for the play-in later this week, but for the last time this regular season, we need to review who won and who lost the final, regular-season weekend of the Overwatch League’s 2019 season.

Rivalry Weekend was the best, special weekend this year by a mile. As the only city with two teams in the league, Los Angeles got a Valiant vs Gladiators match for the whole town to watch. That’s not all, though! Each team competed for wins and dunks on opposing fans and Bren all weekend. Fans at the event had a plethora of other activities to do while waiting for the awesome slate of matches. Bravo, Los Angeles, take your spotlight.

Perfect Stage Four? Check. Back to back wins to clinch the last playoff spot? Check. Memes, memes, and more memes? Check. The Atlanta Reign are the biggest winners outside of the host city this weekend. Atlanta was nigh unstoppable all weekend, only dropping the best map of the weekend to Dallas. Had Stage Four had a Stage Playoffs, then Atlanta would have been the top seed (they had one more map win than San Francisco). Dallas was not happy this weekend, partially because Atlanta support, Dogman, called out Dallas’ coach for not picking any Atlanta players for the US World Cup team. Things started to spiral on Twitter, but Dogman and some teammates doubled down on “clowning” around. Regardless, Atlanta just won a weekend off to watch and learn who’s they could face in the 2019 Playoffs.

For such a young rivalry, the San Francisco Shock/Vancouver Titans rivalry is the best. We got four matches between the two, and the teams are split. Vancouver won the first two matches (Stage One, Week Two & Stage One Championship), and San Francisco won the next two (Stage Two Championship & Rivalry Weekend). Two of these matches came down to a tie-breaking map, and two were Stage Championships. Barring anyone making a Shanghai-esque run through the Playoffs, I’m betting now that this will be the Grand Finals Matchup.

This is the best analogy of what the Valiant faced this weekend, and this is what happened to their playoff hopes because of it. To be fair, these were daunting matchups, to say the least. Regardless, these crushing losses officially knocked the Valiant out of the Play-In and locked the Chengdu Hunters into the final spot. For a team that lost every match in Stage One, barely missing the regular season Play-In is heartbreaking. Even worse, technically the Valiant hosted Rivalry Weekend on their own, not in partnership with the Gladiators. Losing both matches on your weekend is a bad look, and shows the Valiant gave too little, too late.

The one caveat I will mention is to not blame this week’s failures on the Valiant’s elimination. San Francisco and the cross-town rivals were insanely tough to beat. Instead, look back to Week Two of Stage Four, when the Valiant lost to the Seoul Dynasty 3-2. The Valiant led 2-1, heading into Map Four. Had the Valiant locked down that map, then they would be playing on Thursday, not Chengdu. Close eliminations are always rough breaks, but for now, all the Valiant can do is look towards next season.

Talk about a championship hangover. The Hangzhou Spark swept Shanghai on Sunday afternoon, leaving Shanghai to finish Stage Four at 1-6. For a team that entered this stage sitting in a potential playoff spot, this feels more like cliff-diving than sliding. Also, it doesn’t make that much sense because Shanghai ran the tables in Stage Three with DDing’s Pharah performances. Stage Four gave us the role lock, meaning DDing had to play damage characters. I get the importance of the meta, and this meta saw pulling heroes like Orisa and Roadhog rise, but Shanghai is a team that should have countered that well. My play-in predictions will go up later this week, but don’t expect to see Shanghai go far.