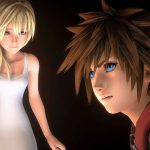 Before Tokyo Game Show 2019 officially kicks off, Square Enix has dropped the latest trailer for Kingdom Hearts III‘s anticipated DLC, Kingdom Hearts III Re Mind. The DLC pack is said to include an array of new boss fights, new forms for Sora and a whole lot more. Thankfully, English subtitles are provided since the trailers are voiced in Japanese (the trailers are for the Tokyo Game Show, after all). Although the teaser is only close to two minutes long, there’s enough context in it to have hardcore fans speculating on the additional story elements being presented.

RELATED: Control Review On Xbox One

The voice in the beginning of the trailer, whom I assume to be Chirithy, makes a comment on the rigid (and confusing) time travel rules. He says, “The heart you have now already existed during that time. It had already gone back into the past. Nothing can change that fact.”

It’s hard to pinpoint who Chirithy is talking to or about since Kingdom Hearts III likes to subvert expectations, but we can predict that the subject is either Sora or Xehanort.

The next shot is a little more exciting since it features the sea salt trio: Axel, Xion and Roxas. It looks as if we’ll get a little more action added to Xion’s reveal since Axel and Kairi question why a hooded figure carries the exact same keyblade Sora has in the Keyblade Gravyard brawl. In the same area, we get a glimpse of cinematic gameplay involving Roxas, Xion and Axel fighting Saix.

The coolest part about this reveal is the sea salt trio look like they’re executing a team attack! Given that the DLC will let players choose between different characters to play as in the final battle, it’s exciting to see new team attacks implemented as well.

The trailer then shows Sora and Chirithy in the Final World. Judging by their conversation, it seems that Sora is staying optimistic after Kairi’s “death” by saying, “She’s still with us, right?” Chirithy responds by saying the matter is a lot worse than it seems, which is… obvious? Dying, after all, can make things difficult.

Now onto a great surprise: the Oblivion keyblade makes its return along with a new Dark Form for Sora. In Dark Form, it seems that Sora’s block now becomes a surrounding barrier crossed with black chains. During this gameplay snippet, eagle-eyed viewers can spot a few dark figures attack Sora that look a lot like Vanitas’ Remnant, an end-game boss fight in Kingdom Hearts Birth By Sleep! So it looks like he’ll be making a return along side…

Xigbar, or recently revealed as Luxu from the Kingdom Hearts mobile game. This gameplay portion shows off Sora with Oathkeeper and the sleek white and grey outfit that comes with it. Both characters have a cowboy standoff before shooting beams of light at each other. During this, an “Excellent” grade can be seen as Sora successfully dodges and hits Xigbar/Luxu. 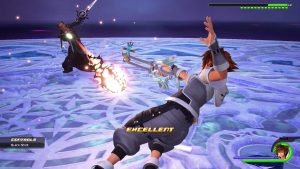 Next in the trailer is the fan-favorite Aqua standing up to Terranort in the Keyblade Graveyard. Again, it looks as if we’ll get a bit more character context in these moments that are considered to be impactful for fans. At the same time, Aqua and Ventus have a cool (pun intended) team attack where Ven is riding on a wave of ice conjured by Aqua before spinning to the ground. More team attacks!

Coming off of the serious-to-cheery mannerisms of the character, the trailer next shows The Master of Masters talking to Young Xehanort. He says, “I suppose letting false light dictate the future might be pretty lousy. So? You have the power to make a change. What do you want for the world?”

False light? Could he mean Sora? Riku? Either way, the Master of Masters is doing what he does best: stringing along his puppets. Either this, or Young Xehanort is having second thoughts on his grand plan, which can probably help fill us in on Master Xehanort’s sudden change in character at the end of the game.

The penultimate scenario that’s entirely new visually is the conversation between Sora and Namine. We can assume this scene takes place in the Final World, but instead of Namine just being a voice, like in vanilla KH3, she can now be seen. Sora walks off telling her to go to the world of “ocean and sky,” which could be a reference to the Final World.

And Finally, a Little Wild Speculation

As an extra note for true Kingdom Hearts nerds: Sora’s name means sky while Kairi’s name means sea. Perhaps this is a stretch, but does a separate plane or realm exist because Namine exists? Is this where Sora told her to go? Namine is an anomaly in the Kingdom Hearts universe, so it’s not completely out of bounds to think so. I’m still sticking with the idea that Sora meant The Final World though.

The final scene of the trailer looks to fill a huge plot hole in the original game: the fight between Terranort and Lingering Will. Before, it was, and still is, unknown what happens to the Lingering Will after he clashes with Terranort on the battlefield. Now, it seems the DLC will fill that gap. However, if this part isn’t playable… Nomura, do your thing! 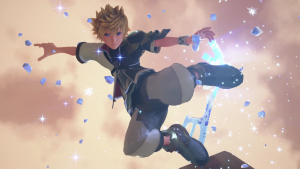