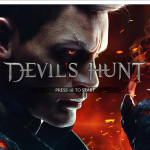 You are reading
Devil’s Hunt Review

With a year that opened with the stellar Devil May Cry 5, newcomer studio Layopi Games seeks to close the year with its debut third-person brawler, Devil’s Hunt. It’s a game that tries to be ambitious, but can never quite muster the chops to be anything but ordinary. So without further ado, here is our review of Devil’s Hunt.

*Disclaimer: PC review code for this game was provided by the publisher,  1C Company*

Devil’s Hunt is a third-person brawler which has players taking the role of former boxing champion with a pile of anger issues, Desmond. The game opens with a flash-forward to what seems to be the apocalypse. Demons run rampant in a half-destroyed city and everything is on fire. In much the same way of most Metroidvania titles, players are given a glimpse of what Desmond will look like by game’s end: some kind of partial demon with souped-up powers to wreak havoc on his foes.

After this brief taste, players are returned to the past where Desmond is on the eave of proposing to his long-time girlfriend Kristen. An hour later, Desmond is in Hell signing a deal with Death to become a bounty hunter of souls in the presence of Lucifer. If that sounds like a crazy turn of events that the character should acknowledge, you’d be right. Unfortunately, Desmond is a strange character, to say the least, and the story makes choices that are totally out of left field. Desmond is a prototypical tough guy, with a curse-word laden quip for every situation, and he only gets more arrogant with the addition of his newly acquired demon powers. At no point is he made sympathetic despite rough circumstances, because, quite frankly, he’s a bit of a tool. He has no real pathos and is all id. 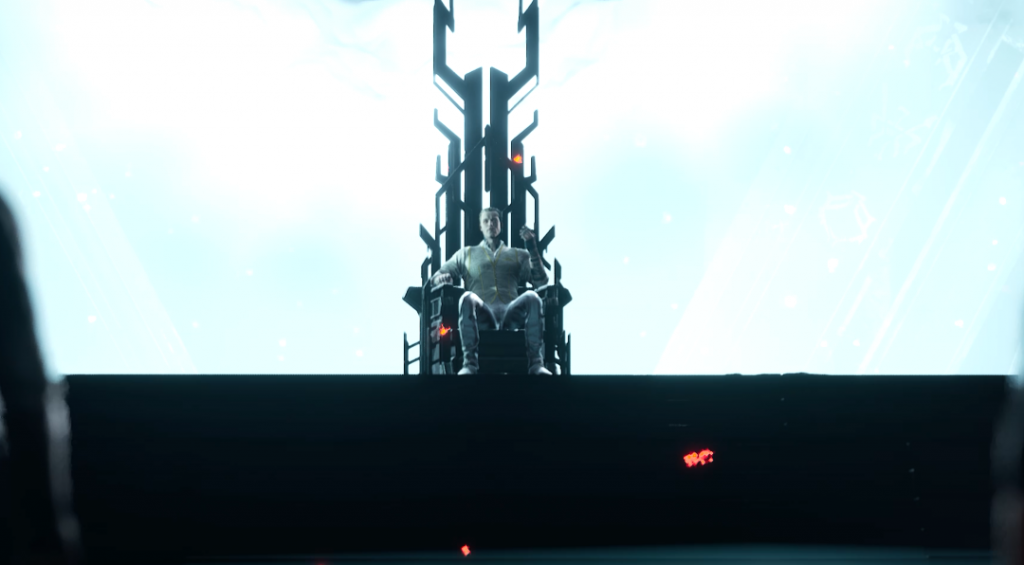 When the game is on, it can produce some visually striking cinematography. Sadly, these moments are few and far in between.

The game’s pacing does it no favors. On Desmond’s first mission, accompanied by his handler, Sawyer, Desmond is constantly berated for performing poorly, yet he is able to enter a building full of anti-demonic wards that are supposedly impenetrable. At this point, Desmond is labeled the “Savior and Destroyer”, though that label is practically superfluous. From here, things only get weirder. There are encounters with angels, multiple prisons in Hell and random characters seen once and then never again. It’s incredibly uneven. The back third of the game is a hunt for Muriel, the one being who defied both Heaven and Hell. A cool premise, but like so much of the game, leaves the player wanting.

The story supposedly hinges on a choice between being the Savior or the Destroyer. Not only is no choice ever actually made, but there was never a reason to be the Destroyer. The demons in Hell were never anything but terrible, and the angels anything but reasonable. At one point there is what is supposed to be a dramatic revelation which gets Desmond to hate the angels. However, the framing of the sequence made it so baffling that I had to read the in-game story summary to see what it actually meant. Oh and that apocalypse that you see in the opening? You never actually get there. Literally, the game’s climax involves one legitimately cool sequence featuring a never before seen character, and then a final boss fight against, well not the character you would expect.

The dialogue is routinely cringe-worthy (“Aren’t you a little short for an Executor” quips a demon upon you rescuing him from prison). Often times the vocal track would drop out entirely during cut scenes. Though this is a bug the developers have acknowledged and hopefully will be patched when the game launches. Sound cues are also oftentimes misplaced. The violin that plays when showing Hell for the first time particularly stuck out to me. I’m not sure if it was supposed to induce cognitive dissonance, but it definitely made me pause, and not in a good way.

It is clear the kind of game Devil’s Hunt wants to be. It wants to stand with the premiere third person character action games of the genre, but it lets down at every turn. The great character action games all have a trademark. Devil May Cry has the style; God of War has the scope, and Uncharted has the story. Devil’s Hunt is lacking is any of that. Layopi Games website expresses a desire to create “innovative gameplay solutions”, but in that department, Devil’s Hunt is pretty lifeless. It is less an action game than it is a brawler. The combo system, as it exists, consists of five different combos in each of three unlockable styles.

The styles themselves are quite unique, to give the game credit, but once the power to heal and attack from a distance arrived, the combat became absurdly easy. The game does allow for on the fly switching between styles and each style has its own cooldown. So by the endgame, it became an actually somewhat fun rhythm of juggling power cooldowns for maximum effect. However, a bug with the game made it so that my third skill tree wouldn’t unlock beyond the first skill, so I never got to exploit this to its fullest. All of this leads us to the three big sins Devil’s Hunt commits. 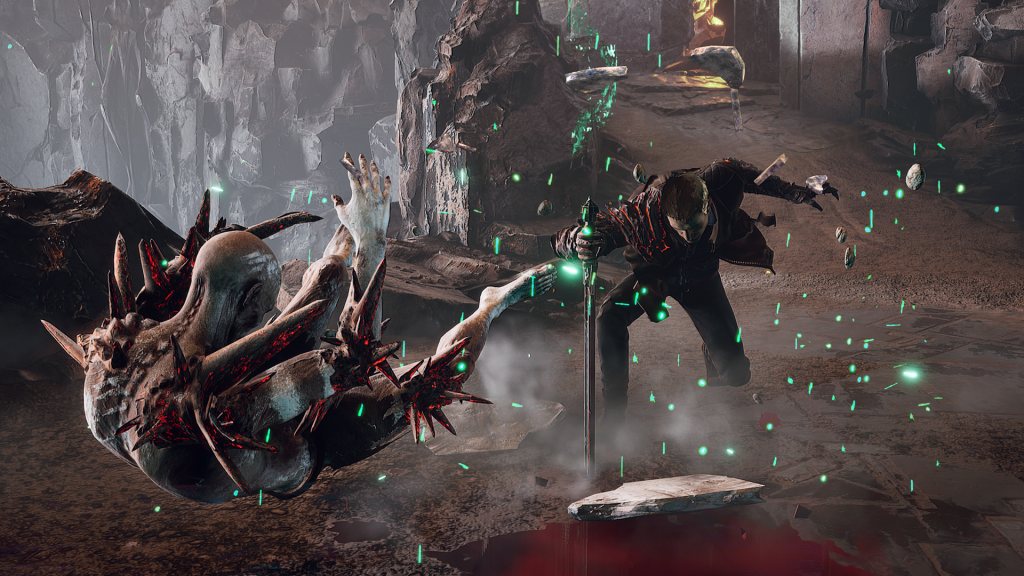 Hit detection is so poor that I’m not sure if this is a hit or a miss.

Sins of the Past

First, the enemies have, on average, three attacks that are very easy to spot, unless of course, they hit you from off-screen, which they do constantly when you are in a brawl with multiple opponents. As a result, you are forced to kite enemies around until you can get them all in front of you. There are audio cues for attacks, but they aren’t good enough when there are four enemies in the arena. Second, there is no life bar or health indicator around enemies. Therefore, it is nearly impossible to know how much damage attacks actually do. Is the Spear of Destiny equivalent to a fast attack? How much stronger is my heavy attack than my fast attack?

The enemies are not animated well enough to show what state of damage they are in, so you are left just guessing what the most effective mechanism is for dispatching them. The invincibility frames granted by doing any of your powers also gave a get-out-of-harm free card at any time. So combat become a fairly numbing version of heavy, light, light, light, power. The lack of a dedicated dodge button was frustrating early in the game, but the dash button eventually proved to be an adequate substitute.

The final and most egregious sin is hit detection. In any action game, quality hit detection is an absolute necessity. Devil’s Hunt missed the memo. Attacks which are supposed to knock down opponents result in that maybe half the time. There is no lock-on so range attacks have a decent chance of missing altogether. All of this combined with several times the activation of the demon form resulted in the character being stuck in one spot meant that combat was an endlessly frustrating affair. 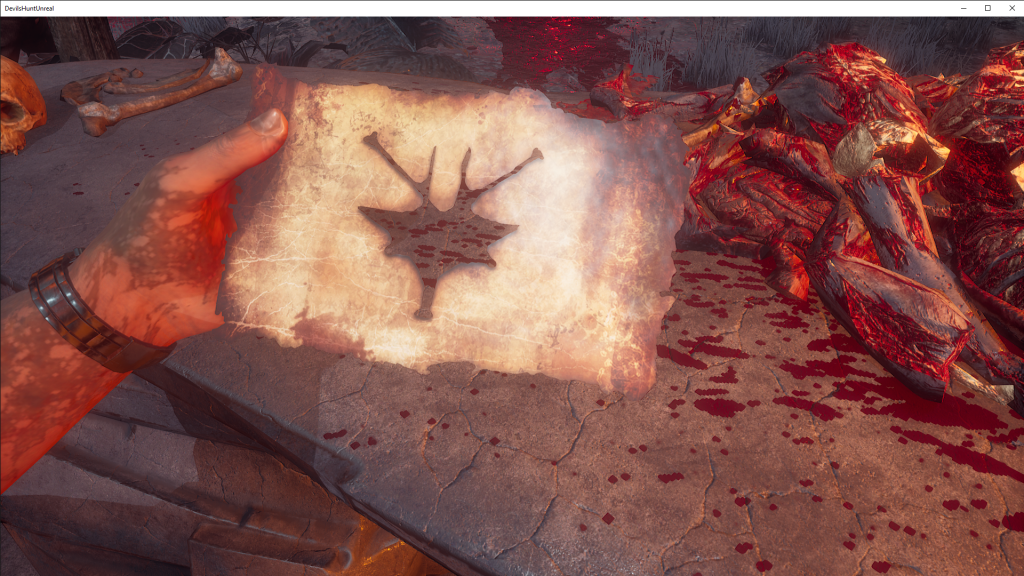 Devil’s Hunt features exciting collectibles like…scarps of paper with weird symbols on them.

The world is fairly lifeless and the painful linearity is felt at every turn. While there is nothing wrong with its depiction of hellfire and brimstone, it feels like it could be from any game. The character designs feel like they are ripped straight from the cutting room floor of Mortal Kombat, though the visual aesthetic of the angels is particularly good and is the one area where Devil’s Hunt really does something interesting. The lighting effects all around are also excellent, but that’s the one highlight of the otherwise clunky engine. There is not enough at any point to hold your interest, especially when you are so often merely punching demonic thug number ninety-seven.

The boss fights aren’t nearly challenging enough even on the hardcore difficulty mode. They also don’t present sufficiently unique arenas with which to fight. The one exception comes near the end with a legitimately clever sequence that was too little far too late. Weirdly, the game also flirts with the idea of incorporating puzzle elements. Desmond even comments as if they planned on including some, but instead, we get this.

There is a remarkable lack of freedom of movement. There is no jump button, the character can’t vault except at certain designated points. The teleport mechanic seems to exist solely so that there would be fewer textures to render. Why is the box in the video even movable? This needless layer of ‘interaction’ serves no real purpose nor does it enhance the believability of the world. Several times you have to pull levers or activate switches. Desmond even supposedly enters into a maze at one point, but the maze only has one route through it. So it really is more of a hallway. I’m not sure if this is a localization issue or just more ideas left on the cutting room floor.

I wanted to like Devil’s Hunt and jumped at the chance to review it. I’m a sucker for character action games, but this failed to inspire on every level. Aside from some really novel choices in art direction, no part of the game will linger with me. The cliffhanger ending is made all the worse by the uneven pacing and nonsensical character moments. The story is based off a novel, and upon completion, I was tempted to check it out. However, the novel was written by the game’s lead designer, so it’s unlikely there are unseen depths there to be mined. Devil’s Hunt failed to deliver any kind of style or substance in a genre loaded with both. With a stacked holiday season approaching, this is one hunt worth skipping.