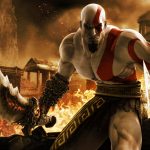 You are reading
Intros that Kept Us Playing

Star Wars Jedi: Fallen Order has only been out for nine hours, but the intro ensured I’ll finish this game. Introductions are the most important part of any medium, but video games are arguably the trickiest. Video essayists, like Extra Credits, repeatedly cover games’ opening’s mechanics and duties for good reason: intros set the standard. Now that The Game Award nominees release on Tuesday, we can include 2019’s best games on this list.

Writer’s note: These rankings judge the intros’ spectacle (how the game grabs and keeps your attention) and tutorials (how the game teaches gameplay). Also, light and generic as possible spoilers for the last game on the list.

This is actually a case study Extra Credits covered above, but it’s worth repeating here. God of War’s opening shot is Kratos casting himself into the ocean and jumps back three weeks beforehand. Kratos is fighting off a monster invasion on the Aegean Sea, which culminates in a fight with the Hydra. Extra Credits used this for an important point:

“[Sony Santa Monica Studios] showed you exactly what you were going to get to do in this game, and exactly why it was cool in the first five minutes of play. Even more impressive, they did it without using any contrivances, like taking away your powers.”

It’s no fun to lose a bunch of awesome powers right off the bat, and force you to re-earn them through the gameplay. So, instead, God of War gives you “Poseidon’s Rage” to help with crowds of enemies. Once you beat the level, you keep your abilities and dive into the story. It’s an excellent intro that holds up fourteen years later.

Here’s an excellent example of an iconic intro. For 1997, Final Fantasy VII was showing the technological capabilities of the PlayStation. First, the camera shows Aeris’ face as she heads out of an alley. As she leaves, the camera pulls far back to show all of Midgar, and the title card flashes on the screen. As the card fades out, the camera zooms into another area of the city, where Avalanche is attacking one of Midgar’s reactors.

If you watch the intro above, then you’ll see that I could stop here, but for the sake of the aforementioned criteria, let’s continue. From there, you spend the next half hour destroying the reactor, learning how to move in the open world, and how to fight. Multiple soldiers and a giant mech try to kill you, but through the tutorial, you learn what you need to do to win. Especially considering the remake’s excellent appearance at E3 this year, I can’t wait to see the update.

Knowing the historical facts and actually understanding how those events went are starkly different concepts. Battlefield 1 ensures that the players know they’re getting the latter in the intro. After a brief cutscene which establishes your current character is re-experiencing WWI, EA sends this message:

“Battlefield 1 is based upon events that unfolded over one hundred years ago. More than 60 million soldiers fought in “The War to End All Wars. It ended nothing, yet it changed the world forever. What follows is frontline combat. You are not expected to survive.”

Then you are thrown into the fog of war. Each time you die, your character’s name and birth and death dates are listed, and then you take over another soldier. In these first ten to twelve minutes, you control foot soldiers, turret gunners, and tank gunners. Chaos reigns. When it’s finally over, two, opposing soldiers lay down their arms, and a montage rolls of all of the War Stories’ main characters.

The Last of Us

The Last of Us is one of the few on this list solely based on one criterion. The intro is the game’s prologue and relies on the narrative hook. A narrative hook that impales your chest and causes more pain every time you try to free it until it rips a chunk out of you when you finish the game.

The Last of Us opens with Joel and his daughter, Sarah, meeting with Joel’s brother, Tommy, and fleeing the zombie outbreak. You watch from Joel’s car as society turns to hell until you can’t drive anymore. Joel picks up Sarah and carries her through the terrified mob. They find a soldier, who swallows his dignity and opens fire on them, killing Sarah. Naughty Dog didn’t pull any punches, The Last of Us is here to shatter your heart.

Finally, the youngest, but the article-inspiring entry on this list. On a related note, don’t forget to check out our impressions on Fallen Order here.

This intro is split into two halves: one that teaches you navigational mechanics, and one that teaches you combat mechanics. You start on a scrapyard, dismantling old Republic cruisers. En route to a more dangerous section of the cruiser, an old Separatist ship is flown in for scrapping. Who says you can work without a view?

Soon after, it’s time to fight and flee. You make your way through a speeding train and fend off all who stand between you and safety. Fallen Order teaches you how to attack, defend, and counter. Once you find freedom, you know the basics of combat and are ready to journey through the galaxy on your quest.

There are a lot more games with equally impressive introductions, many of which I had to omit for sake of length. From games as recent as last year’s Spider-Man to last decade’s Bioshock (both of which are phenomenal games), a lot of games know how to hook the player in. Heck, if you look at either of the videos from Extra Credits back in this intro, you’ll find tons of excellent examples game openings. What are your favorite intros?