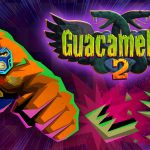 You are reading
Guacamelee! 2 PS4 Review

Guacamelee! 2 is a genie disguised as a video game that will make all of your wishes for a Metroidvania title come true. However, don’t go thinking Guacamelee! 2 is the kind of genie that only grants three wishes. Not only does the sequel improve on every aspect of its predecessor, but it’s a prime platforming adventure. It’s the perfect game for newcomers to Metroidvanias while also giving veterans a refreshing challenge. Without a doubt, the game checks all of the boxes on what makes a first-rate action platformer. While Guacamelee! 2 doesn’t reinvent the wheel, but its humor, tone, and excellent pacing stand out from the rest.

Guacamelee! 2 takes place years after our luchador hero, Juan Aguacate, defeated the menacing antagonist of the first game, Calaca. Juan decided to retire his mask, but fate has a different plan in store for him. When the hulking luchador Salvador and his band of misfits seek the legendary sacred guacamole, which if eaten is said to grant an unfathomable power, it’s up to Juan to prevent a potential catastrophe to the Mexiverse. The player controls Juan as he explores the vivid lands of Mexico while harnessing the power to alternate between two dimensions – The World of the Living and The World of the Dead.

When booting up the game, you’ll immediately be captivated by the Mexican-inspired art style. Players can swap between the World of the Dead and the World of the Living dimensions. This mechanic completely changes the game’s aesthetics, making it the greatest unintentional day and night cycle in a video game. It’s a gorgeous game to look at, especially in the World of the Dead dimension with its distinct blues and purples. The art and music of the game are just a match made in heaven and why the game is a shining gem. 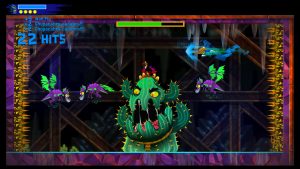 Naturally, Guacamelee! 2 is an extremely colorful game, and it uses its gamut of colors wisely. The eye candy 2D backgrounds aren’t too distracting from the combat and platforming sections either. In fact, the game uses distinguishable colors in the beat-em-up gameplay. Certain moves, like an uppercut or a dashing punch, leave behind a colored trail suggesting that that particular move has to be used on an enemy with an aura of the same color. For instance, uppercuts are red, so use an uppercut on a foe with a red aura to break their shield and start a combo. 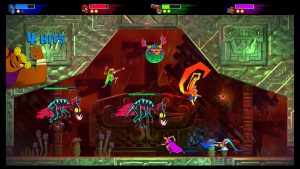 Speaking of combos, the combat system is not like most beat-em-up 2D games. Juan is able to grapple, throw, and combine his four special moves one after another. It’s ridiculously fun and gratifying to juggle enemies with special moves, then grapple and throw them into a wall for massive damage. Not every adversary can be thrown though, and each have their own specialties to get around; Some have colored shields while others will be able summon more opponents, and some even fly. There’s a wide variety of enemies that will test your luchador fighting skills once you have unlocked all of the moves via a skill tree. 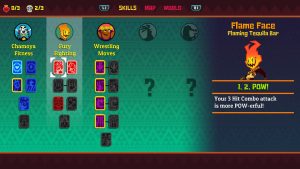 Guacamelee! 2 has clever level design that rivals even the best of Metroidvanias. Juan’s repertoire of wrestling moves are not only for combat, but for platforming sections as well. As an example, Juan’s ground pound can smash through breakable blocks and unlock secret areas. The game eventually required mixing multiple moves to reach more trickier vantage points since Juan’s dashing punch + uppercut combo covered some distance previously unavailable without them. All of the mentioned gameplay elements are amazingly cohesive, but it’s the dimension-swapping feature that truly makes the game stand out. An effortless shift from the World of the Living to the World of the Dead can reveal a new platform to jump on or make an enemy vulnerable to your attacks. Switching back and forth will take some getting used to, but it makes completing those late-game platforming segments incredibly satisfying.

A returning feature in the game is Juan’s best move – turning into a chicken. In the original game, chicken Juan was used just to squeeze through tight spots (literally). Chicken mode in Guacamelee! 2 can now be used in fights and to solve more interesting platform-puzzles. These challenges ended up being some of the most amusing portions of the game since they were so unique. Chicken Juan even has his own set of skills to upgrade, although this skill tree is not as in-depth as the main tree. Nonetheless, it’s a vast improvement from the first game.

Disappointingly, there are only four main story boss fights in the whole game. However, the lack of main story bosses is balanced by numerous mini-bosses and optional boss fights. Nearly all were smartly designed to favor the progression in gameplay, such as recently learning a new wrestling move. Whether it’s dimension swapping or color-matching fighting moves, each boss felt distinct and tested your mastery of the mechanics. While the game could have had a few more main story bouts, the optional content is enough to make the game feel satisfying.

I finished my normal playthrough at around twelve hours, which included near 100% completion on maps and secrets. To snag all of the PlayStation trophies, I immediately dove into a second run on hard and had just as much fun. It’s one of those rare games that has perfect balance in its gameplay. No platforming section goes on for too long, and there’s enough action to master its combat with style. Guacamelee! 2 is as rich, tangy and fresh as the desperately sought-after sacred guacamole.