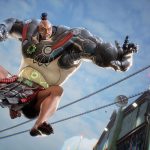 Ninja Theory, developer of the upcoming Bleeding Edge has released its first developer ViDoc. Bleeding Edge is a 4v4 multiplayer game that mixes elements of MOBAs with the twitch action of Overwatch. The developer describes the moment to moment action as akin to a character action game. They further showed off the Sunset Overdrive punk art style with a few snippets of actual gameplay. The ViDoc is hosted by Creative Director Rahni Tucker, whom the crew here at Lords of Gaming had the chance to interview back at E3. The studio reiterated its plans for an upcoming closed beta weekend. It begins on February 14th and runs through the 17th. Players can sign up for the beta by preordering the game here, or if you have an active Xbox Game Pass subscription you are automatically able to join. See the full ViDoc below and look for impressions on Bleeding Edge coming next weekend.