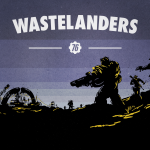 You are reading
Fallout 76 Wastelanders Update Gets a Release Date

Let not your hearts be troubled, Fallout faithful! Bethesda has not forgotten the Wastlander update they promised us in 2019*. After a very disheartening delay from 2019 to Spring 2020, Fallout 76 has been a little stagnant as of late with only the drip-feed of news about the upcoming features of the update (detailed here)

But the wait isn’t much longer, vault dweller! The Wastelander update launches on April 7th, 2020 for Xbox, PS4, and PC (Steam too). The update will bring to the table two new factions, a new questline or two, tons of in-game merch for both, and an overhaul to how charisma works.

Fallout 76 players will need to download the update on April 7. Stay tuned for the latest Fallout 76 news and I’ll see you in the wasteland!

Wastelanders is a massive free update to Fallout 76 that fundamentally changes the Wasteland, coming Fall 2019.

One year after the opening of Vault 76, other humans have returned to Appalachia. Factions of Settlers and Raiders aim to make the world their own and claim a rumored fortune. Embark on a new main quest of choice and consequence, interact with characters and their unique stories, and collect powerful new weapons and armor. Your choices decide their fate.