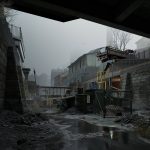 You are reading
Half-Life: Alyx Officially Gets A Release Date

Half-Life: Alyx may be one of the most anticipated VR games in the history of the platform. No VR game before this has generated this much hype and sold as many VR units as Half-Life: Alyx. All of this was accomplished with only a trailer and a launch window. Up until today, the game had a loose release window of March 2020. Which led many to wonder if whether or not they did not give a specific date in case of development hiccups. Valve announced today via social media that Half-Life: Alyx will be launching on March 23rd, 2020. This lands the game firmly 3 days after both Doom Eternal and Animal Crossing. Just in case you thought the gaming calendar in March couldn’t get more hectic, here is another one to add to the list.

Will you be picking up Half-Life Alyx? Let us know in the comments and don’t forget to check back for the latest gaming news and information.

Interested in more information on Half-Life Alyx? Check out the plot summary from the games’ official Steam page.

Half-Life: Alyx is Valve’s VR return to the Half-Life series. It’s the story of an impossible fight against a vicious alien race known as the Combine, set between the events of Half-Life and Half-Life 2.

Playing as Alyx Vance, you are humanity’s only chance for survival. The Combine’s control of the planet since the Black Mesa incident has only strengthened as they corral the remaining population in cities. Among them are some of Earth’s greatest scientists: you and your father, Dr. Eli Vance.

As founders of a fledgling resistance, you’ve continued your clandestine scientific activity—performing critical research and building invaluable tools for the few humans brave enough to defy the Combine.

Every day, you learn more about your enemy, and every day you work toward finding a weakness.