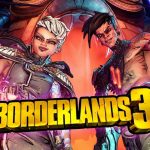 You are reading
Liveblog: Borderlands Live from PAX East

Many developers and other companies have canceled PAX East plans, but one of the few that hasn’t is Gearbox. Today, they’ll reveal full details on the second DLC for Borderlands 3, what’s new in Risk of Rain 2, and more. Follow along with us here throughout the event for up-to-date information.

2:30 p.m.: Gearbox COO, Sean Reardon, starts by reading some fan-mail from Gearbox fans around the world.

2:42 p.m.: Two fans, dating, come up onto the stage. The man starts talking about how he loves her and Borderlands, and gets on a knee and proposes. She said yes, and everyone applauds.

2:44 p.m.: Borderlands 3 is coming to Steam on March 13th. It will have PC crossplay with the Epic Games Store.

2:47 p.m.: Godfall trailer from The Game Awards plays. It’s still on track for Holiday 2020 and will be on the PlayStation 5. Godfall will also be on the Epic Games Store at launch.

2:49 p.m.: Homeworld 3 discussions start. A trailer was supposed to play but technical issues prevented it. The FIG campaign for Homeworld is still available.

3:05 p.m.: Randy Pitchford comes out with a shirt with a new shirt, and picks somebody out of the audience. Pitchford is also giving a piece of concept art of a Vault Hunter from one of the Borderlands games.

The art is a Vault Baby with Mordecai on the other side. As thanks for guessing, the fan got a table worth of Borderlands related content.

3:25 p.m.: The future of the Borderlands franchise starts.

3:31 p.m.: Borderlands 3 DLC roadmap is announced for Spring 2020. The new DLC after December’s Moxxi’s Heist of the Handsome Jackpot is included in the Season Pass.

3:31 p.m.: Pitchford announces endgame updates and overhauled modifiers. April will have a free in-game event called Revenge of the Cartels, while May will have a Guardians’ themed Takedown Event.

3:35 p.m.: Paid DLC information is announced. Pitchford hints that the final DLC will take us “into the head of the wildest Psycho we know.”

3:38 p.m.: Guns, Love and Tentacles: The Marriage of Wainwright & Hammerlock is the official name of DLC 2. It is a Lovecraftian horror campaign that revolves around Borderlands 3 characters’, Wainwright Jakobs & Sir Hammerlock, wedding. Pitchford invites the voice actors for Jakobs & Gaige out for a live-script reading.

3:46 p.m.: Trailer for Guns, Love and Tentacles starts. As mentioned, it shows a Borderlands take on a Lovecraftian wedding. The DLC release on March 26th.

3:49 p.m.: Randy ends the presentation with instructions on where the meet and greet is located, and he thanks the audience for watching.