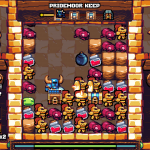 The Lords of Gaming crew are out and about in PAX East 2020. LOGNET’s very own Hector interviewed Sandy from Yacht Club Games discussing the developer’s upcoming title Shovel Knight Pocket Dungeon. The beloved franchise known for its rewarding yet grueling difficulty gameplay. Shovel Knight Pocket Dungeon takes the series’ rogue light foundations and meshes it with puzzling elements.

Gameplay features a Tetris style puzzle layout, where enemies, barriers, and potions drop down while you control Shovel Knight. The game features the same pixelated art style the series is known for. It will also have many of the loved characters, enemies and bosses from previous entries in the Shovel Knight universe. And for the first time in the franchise, players will be able to play as some of the bosses. Check out the full interview below.