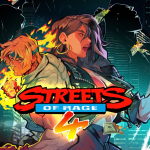 Coming live from PAX East, the Iron Lords Podcast crew were able to get hands-on with Streets of Rage 4 from developer, Lizardcube. Streets of Rage 4 hearkens back to the four-player arcade-style brawlers of the eighties. It is a side-scrolling adventure that supports four-player local co-op and two-player online coop. The co-op system plays into the brawler series with combos between characters. The series sees the debut of a new character, Floyd, who looks like Jax from Mortal Kombat with electric gauntlets.

The game boasts a radical cell-shaded art-style that makes the game look like a vintage cartoon. The lighting and particle models though are all modern. The backgrounds are as full of life and character as the brawlers themselves. Check out our full gameplay session below and stay tuned for a developer interview later in the day.

Streets of Rage, known as Bare Knuckle in Japan, is a trilogy of beat ’em up games developed and published by SEGA in the 1990s.

Famously known for its non-stop action and electronic dance influenced music – scored by Yuzo Koshiro and Motohiro Kawashima – the series has gained the status of cult classic throughout the years. It is considered one of the best beat ’em up series of all time. After many years, Axel and Blaze are finally picking up the fight where they left.

The game sports hand-drawn visuals from the team behind 2017’s gorgeous Wonder Boy: The Dragon’s Trap remake. Streets of Rage 4 builds upon the classic trilogy’s gameplay with new mechanics, a fresh story and a gauntlet of dangerous stages with a serious crime problem. Streets of Rage 4 recalls classic gameplay but it stands as an entirely original arcade-style romp thanks to the expertise of Guard Crush Games and Dotemu.

Whether players gang up with a friend or clean up the city solo, Streets of Rage 4 is a skull-bashing, chicken-chomping delight all set to a thumping soundtrack sure to get your blood pumping.