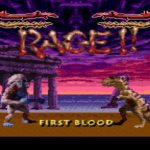 You are reading
Primal Rage: A Retrospective Look at a Forgotten Fighting Gem

It’s easy to remember some of the stalwart fighting games of the 1990s. This was a time when Street Fighter came into its own as the choice of technical fighting game fans. SNK’s The King of Fighters series innovated with its team battle systems. Of course, Mortal Kombat was there to push the envelope and generate controversy with its over-the-top violence and fatalities. Lastly, Killer Instinct was well known for its graphics, auto-combos, and combo breakers. However, when looking at fighting games from this era, there is one name that many gamers seem to have forgotten: Primal Rage.

Primal Rage first released in arcades in the summer of 1994. In the two years following its launch, it achieved mainstream popularity. It was a staple of many arcades at the time, and even spawned a line of comic books and action figures. Between 1994 and 1996, ports of the arcade version released on virtually every console and platform known to man at the time. Primal Rage released on (deep breath) Genesis, SNES, Game Boy, Game Gear, PlayStation, Saturn, 32X, 3DO, and PC (DOS). Versions of the game were even ported to the Amiga and Jaguar CD. This game was big at the time. Later, the game would come to the PlayStation 2, GameCube, and Xbox via the Midway Arcade Treasures 2 compilation.

Primal Rage featured a roster of seven fighters. What made the game unique at the time is they were represented by dinosaurs and giant apes. At a time when Jurassic Park and kaiju flicks made up a big part of my childhood, my 11-year old mind was blown. While there were a couple of palette-swapped fighters, the roster had a great variety. The fighters were presented as gods vying for control of a post-apocalyptic “Urth.” Of course, some were on the side of good. The “good guys” consisted of Sauron, Talon, Blizzard, and Armadon. Contrarily, the evil-doers of this universe were Diablo, Chaos, and Vertigo 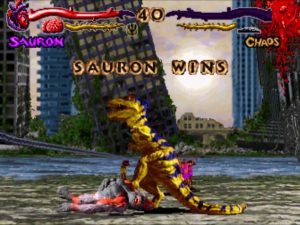 Primal Rage distinguished itself from other fighters by featuring giant dinosaurs and gorillas as combatants.

Sauron is a tyrannosaurus rex. He is big and slow but deals devastating damage at close range and his hard hits easily stun opponents. Talon is a velociraptor. He’s the shortest character, but he is agile and can close distance quickly to execute lethal combos. Blizzard is one of the ape characters and is basically Primal Rage’s version of Sub-Zero with his ice-based attacks. Armadon is a hybrid of a triceratops and stegosaurus and is a balanced character overall.

On the evil side, first, we have Diablo (my main fighter). A palette-swap of Sauron, his red color indicates his preference for doling out fiery ranged attacks. Chaos (a palette-swap of Blizzard) was known for his use of bodily functions to perform special and finishing moves. Vertigo is the game’s only female character and is essentially a king cobra with arms and legs. She was lethal in ranged combat, and her special attacks could easily stun unprepared adversaries and open them up for combos.

Primal Rage Not for the faint of heart 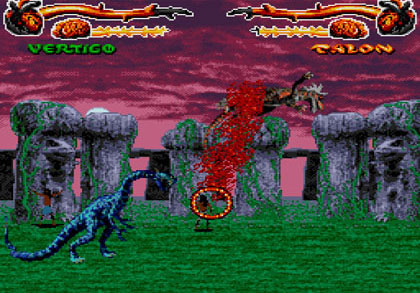 Like the Mortal Kombat games of its era, Primal Rage was reliant on blood and gore effects during attacks, combos, and fatalities.

In addition to its character roster, Primal Rage became famous (or, more appropriately, infamous) for its violence. The player can input a button combination to eat the human followers littered around the battle arenas to regain health. Attacks and combos resulted in gallons of blood filling the screen. Health bars are represented by an aorta connecting to the player’s heart, and when a character is defeated, their heart explodes in the corner of the screen. When a character is defeated, players can input button combinations to execute a variety of finishing moves. Some of these finishers were comical in nature, but most were bloody and gory. Of particular note was Chaos’ “Golden Shower” fatality, wherein he voids on his opponent, his acidic urine reducing them to a pile of bones. This violence generated significant controversy, much in the same way that the Mortal Kombat games did at the time. 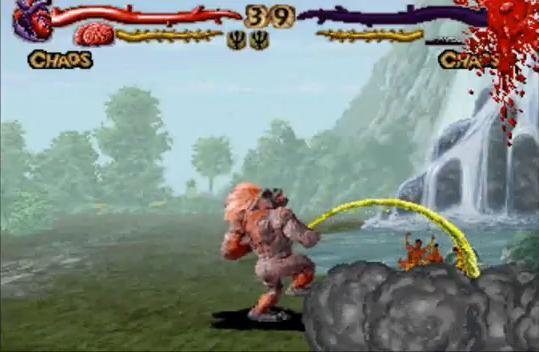 Chaos’ “Golden Shower” finishing move was the subject of much controversy.

With that being said, it would be easy to simply dismiss Primal Rage as being “Mortal Kombat with dinosaurs.” However, there were some unique aspects of the game that helped set it apart.

Primal Rage used a very unique style for its visuals and animations. The dinosaurs and apes were painted models and were animated using stop-motion animation techniques. This was rare at the time and helped give the game its own distinctive look and feel. Special moves and fatalities were executed when the player first held a combination of buttons, then moved the joystick/D-pad to perform the move. While this was “backwards” for many fighting games, it made most of the special moves easier to pull off because they were less reliant on timing. In this way, the strategy of the game was based on not if you could pull off the special moves, but when you should pull them off. However, I do need to point out that many of the fatalities are notoriously difficult to pull off.

Primal Rage also introduced a “no cheese” system that prevented players from spamming cheap moves over and over again. A key gameplay element was alternating quick, strong, and fierce attacks to execute combos. Lastly, defensive players that simply blocked for an entire match would be penalized, as they would be stunned and open for a combo after a certain amount of blocked hits.

In addition to being a fixture at my local arcade playing the big boy version of the game, I also played Primal Rage at home on Genesis, SNES, PlayStation, and PlayStation 2. It should be noted that there are significant differences between each home version of the game, which I will summarize based on my experience in case you’re interested in checking it out for yourself.

The SNES version of the game is the weakest homeport in my experience. It had better graphics and sound than the Genesis version and was based on the newer 2.3 arcade release. However, it was very prone to slowdown. Furthermore, there were missing frames of animation, and Chaos’ Golden Shower fatality is censored out of the game. For these reasons, the SNES port is the least-desirable way to play Primal Rage on a home console.

The Genesis port was probably the version most people played at home, given the popularity of Sega’s 16-bit console at the time. It was based on the older 1.7 arcade release, meaning that characters only had two fatalities (compared to three in newer 2.3 versions that other ports of the game are based on) and some of those fatalities were presented differently. It also had less vibrant graphics and crunchier sound than the SNES port. Notably, however, Chaos’ Golden Shower fatality is uncensored in the Genesis version. Additionally, the Genesis version is more playable than the SNES version because it has a better frame rate and more animation. If you want to play Primal Rage on a 16-bit console, the Genesis edition is the way to go.

If you want to play Primal Rage on 16-bit consoles, the Genesis version is the way to go because it has more animation and is not censored.

The PlayStation version of the game featured much better visuals and larger characters when compared to the 16-bit versions. It was very close to the arcade, but it was missing a few animations and had some weird audio bugs. Overall though, it’s a great way to experience Primal Rage at home. Anecdotally, it seems as though the Saturn version provides the experience that is closest to arcade-perfect. It has more animation than the PlayStation version and none of the audio glitches.

It is worth noting that the arcade version of Primal Rage has a strange, complex security/copy protection software in place that no one has been able to crack to date. Not even the developers knew about it when the game was ported to Midway Arcade Treasures 2 for the PS2, GC, and Xbox. As a result, this version of the game sees most of the blood replaced with a strange pus-looking substance. While this port is otherwise great, I would not recommend it for this reason.

Waiting to return to Urth once again

In summary, Primal Rage was a unique fighting game that experienced runaway popularity and controversy in the mid-1990s. Its position in arcades followed by the multitude of ports that it spawned is evidence of its staying power. I was devastated when its planned sequel was canceled. To this day, Its still my favorite fighting game of all time. If you like fighting games, you owe it to yourself to at least check this one.  In the meantime, I can only hope that someone revives this long-dead IP and brings it back to the forefront of the fighting game genre.