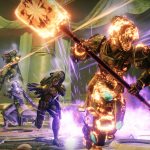 You are reading
These Are Destiny’s Rarest Triumphs

Triumphs in Destiny are a key carrot keeping players going through major content lulls. They contribute to the player’s lore score and are needed to acquire the game’s many titles. Triumphs are broken down by type into Account, Destinations, Seasonal, Gambit, Crucible, Vanguard, and Lore.

In all there are 2007 Triumphs in the game. These are the rarest of them all as reported by Destiny bot, Charlemagne.

Complete a round of Gambit quickly. Total redeemed- 2,154

I am not sure if this says something about the popularity of Gambit as a mode, or about the difficulty in coordinating with players to kill the envoys first. Regardless, this Triumph requires players to complete a round in less than 3 minutes. The catch? The Triumph is only awarded to the winning team, making it even more of a rarity.

The difficulty here is making a Guardian build that enables your grenade to recharge at a fast enough rate that you even get five shots at kills. This is true even in the recharge heavy Mayhem mode where Supers pop fast and furious. Exotics like Armamentarium (Titan) and Starfire Protocol (Warlock) are a must for those hunting this Triumph as they give an additional grenade as a perk.

The number eight spot begins a run that says more about the state of Destiny 2 at a particular point in time. Season 6 was the Season of the Drifter and the focus was heavy on Gambit and new modes, Gambit Prime and the Reckoning. Clearly, there was not a big PvP focus as just over a thousand players won Glory matches at legend during this season for the Triumph.

The focus of Season 5 were the four forges of the Black Armory. These wave-based PvE modes dropped some of the best loot in the game including Blast Furnace and Jotunn. These guns are still relevant to the meta today and may be why this season saw a downturn in PvP players.

It is a little crazy how few players were into the PvP aspect of Destiny for a long time. Seasons 4-6 lasted from September of 2018 through May of 2019. That’s almost an entire year where hardcore players either didn’t or couldn’t reach the highest tiers of Destiny PvP. It’s impressive that the game was able to rebound, and hopefully, next Season will bring welcome additions to the PvP field.

Complete the “Garden of Salvation” raid within the first 24 hours of release. Total redeemed- 542

The top five is full of these Triumphs, and it’s no surprise that Garden finds its place here. Widely considered to be one of the easier raids, the interesting thing here is that 542 is not divisible by 6, which means at least two people went back for more after beating the raid for the first time. Good on them.

There is a reason that periodically some incredible videos surface showing a go crazy with their super and rattling off a full team kill plus one. It’s a feat that less than 0.001% of players have accomplished.

Complete the “Crown of Sorrow” raid within the first 24 hours of release. Total redeemed- 510

Crown of Sorrow’s place this high was actually a bit of a surprise. Considering it is a shorter raid than Garden of Salvation, I would have thought these two would be flipped. However the crazy amounts of cross-talk coordination required for the final two phases of Crown point to the intricacy of the encounter. Unlike Garden, however, no one managed to double dip here and 85 full fireteams completed the challenge in the first day.

The most baffling of the top ten. This Triumph’s rarity points to just how few trace rifles there are in the game, and how poorly incorporated they are into the game’s meta. Aside from that one week where everyone was using Prometheus Lens, trace rifles are basically never seen in Destiny 2.

Completed all raid(Last Wish) encounters in the first 24 hours after its release. Total redeemed- 12

The Last Wish is really difficult. Even with a fireteam that knows what they are doing, completing Riven without using the rocket/tractor cannon cheese is a feat in and of itself. It is exceptionally long, rivaling King’s Fall for length and complexity, it nonetheless is a high watermark for encounter and aesthetic design. Only two fireteams completed the raid in the first day. They earned their place at the top of this list.

Do you have any of these Triumphs? Let us know and tune into The Last Word with Lord Cognito and Ebontis every Friday, your go-to looter shooter podcast.