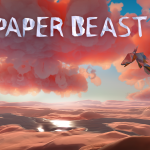 You are reading
Paper Beast Gets a March Release Date

Paper Beast, the stunning new VR game from acclaimed designer Eric Chahi is coming to Playstation VR on March 24th. We had a chance to catch up to Eric at PAX East last week and came away suitably impressed with his vision and passion. Eric is best known as the creator of cult classics Another World and From Dust. Paper Beast boasts a visually dramatic world scape reminiscent of Journey combined with origami-like architecture. The official press release is after the trailer.

Independent studio Pixel Reef has announced Paper Beast , the poetic journey through a blossoming virtual world by renowned game designer Eric Chahi , will release March 24 for PlayStation VR.
The new game from Chahi, the creative mind behind Another World, Heart of Darkness and From Dust, is a dreamlike odyssey through a wild, simulated ecosystem. In this strange, uncharted world, form delicate bonds with fascinating and exotic creatures, solve environmental puzzles, and unfold the mysteries of a land born from long-lost Internet data.
Created from the ground up for virtual reality, Paper Beast invites intrepid explorers to understand this dreamlike world through the real-time consequences they create. In adventure mode, collaborate with fascinating wildlife and shape the environment to overcome obstacles or resolve puzzles, with everything from weather and terrain deformation to the way animals respond fully simulated.
The almost-infinite play space of the sandbox mode approximates a god game experience, where experimentation and ecosystem play a major role. The player can sculpt the terrain, play with the weather, and interact with creatures and plants. All consequences are calculated in real-time by the deep physics engine that powers Paper Beast.
Facebook Twitter Google+ LinkedIn Pinterest Tumblr
Previous article Top 5 Summons That NEED To Be in FF7 Remake
Next article Ori And The Will Of The Wisps Review: Platforming Euphoria