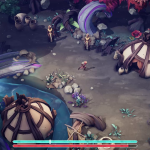 You are reading
PAX EAST 2020 Interview: Nanotale An Adventure Worth Typing Home About

One of the best aspects of Indie games is that they often think outside of the box. While Indie RPG’s feel like an overpopulated genre these days, Nanotale – Typing Chronicles is a truly unique take on the genre. With its core gameplay based around typing, instead of a traditional controller or mouse and keyboard combination. It features a beautiful 3D fantasy world for you to explore with many puzzles to solve and enemies to vanquish. The game features a wide variety of accessibility features the most prominent being that it is supported in 7 different languages.

Our own Pete Snalydo got a chance to speak with the developers from Fishing Cactus. About topics from their choices in regards to how the game inputs. All the way to crafting the beautiful fantasy world. Nanotale is definitly a title you will want to keep an eye out for, as it truly is trying to do something unique. In a genre that is very oversaturated at this point in time.

What do you think of Nanotale? Let us know in the comments and don’t forget to check back for the latest gaming news and interviews from PAX East 2020.