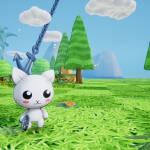 The Lords of Gaming are front and center at the PAX East 2020 show floor. The LOGNET crew got a chance to interview Victor of Burgos Games to showcase his upcoming platformer Neko Ghost, Jump!.

Neko Ghost, Jump! is a Puzzle-Platforming Speed Running hybrid game. Players can switch camera perspectives, at will, to solves puzzles, combat enemies or clear levels faster. The game’s main character, Nekoman, runs, jumps and fights his way through various environments to find his kidnapped friends and loved ones. In addition, Nekoman can also change between his physical and ghost forms to solve puzzles.

Each level has a leaderboard that players can try their best to outdo others. If they are the slow type, they can just collect as many coins as possible and find their friends that have fallen off the ship. Be sure to check out the full interview and game preview below.

Neko Ghost, Jump! is slated to release on Steam, Xbox One, and PlayStation 4. Are you interested in Neko Ghost, Jump!? Let us know in the comments and don’t forget to check back for the latest gaming news and information.