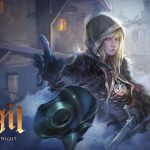 You are reading
PAX East 2020: Vigil The Longest Night Interview

The Lords of Gaming are out in full force in PAX East 2020. LOGNET contributor Hector interviewed Vlad who talked about Vigil: The Longest Night. The game is a 2D platformer side-scroller that is heavily inspired by the Castlevania Series.

Vigil: The Longest Night also takes notes from HP Lovecraft material and boasts an interesting graphical style. The game will feature a more technical combat system. It’s expected to be released later this year. Check out the full interview below and stay tuned for further PAX East 2020 updates.