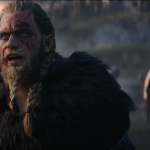 You are reading
A First Look At Assassin’s Creed Valhalla

There have been leaks and rumors about the upcoming Assassin’s Creed game since last year. With many pointing to a Viking themed game as Ubisoft continues this long-standing franchise. This marks the 12th mainline entry in the Assassin’s Creed franchise. Yesterday, phenomenal artist BossLogic revealed through his work on a live stream in partnership with Ubisoft. Assassin’s Creed Valhalla is coming.

Assassin’s Creed Valhalla is coming to Xbox One, PlayStation 4, PC, Stadia, and next-generation consoles. While it currently has no official release date, it has a release window of holiday 2020. The game is being worked on by 15 different Ubisoft studios. It is safe to say that the game could be one of the most ambitious in the franchise’s history. You won’t have to wait long to see more of the game either. As Ubisoft has teased on social media that they will be presenting a gameplay trailer at the May 7th Inside Xbox event that was announced earlier today.

We will be happy to reveal our first Assassin’s Creed Valhalla gameplay trailer during the First Look Xbox Series X Gameplay on Inside Xbox. Stay tuned. https://t.co/wokVel8908

It was also noted by shinobi602 that the game will support smart delivery on Xbox. This means if you purchase a copy of the game on Xbox One, it will essentially upgrade to the Series X version when you upgrade. This is the same system that is allowing CD Projekt Red to do the same thing with Cyberpunk 2077.

What did you think of the reveal trailer? Let us know in the comments and don’t forget to check back for the latest gaming news and information.