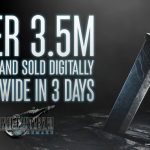 Final Fantasy VII Remake has been one of the most polarizing titles of this generation. From its original reveal at E3 2015, as part of the “E3 of Dreams”. While the development was filled with various struggles, challenges, and misfires. Despite all of this, it was still one of the most eagerly anticipated games of this entire generation. The game officially launched on April 10th. Even the launch was plagued with issues, as physical copies were being released at varying dates pre-launch. Complications due to shipping and store availability because of COVID-19 hampered the game’s launch.

This, however, did not appear to have a negative effect overall in terms of sales. The official Final Fantasy VII Remake Twitter account announced the first official numbers for the game. In the first 3 days of the game’s launch, the game shipped and sold digitally an incredible 3.5 million units.

We're proud to announce we shipped and digitally sold over 3.5M copies of #FinalFantasy VII Remake in 3 days! 🥳

All of us would like to raise our Buster Swords to say THANK YOU to everyone who has supported us during launch, we hope you’re all enjoying the game! #FF7R pic.twitter.com/4m93Op7O9I

This is a massive success for Square Enix and the entire team behind the game. While it is important to note, that copies shipped does not equal copies sold. However, it gives a great ballpark idea of much the game is moving. As Final Fantasy VII Remake is sold out at many retailers currently. It cannot be understated that this game is a massive success. Through all of the trials that this game faced through its development, it released to fanfare from both critics and fans. It will be very interesting to see how the game fairs in April NPD numbers next month. It will be hard to imagine how Square could top this with the release of the next chapter in the story. Only time will tell.

Did you play Final Fantasy VII Remake? Let us know in the comments and don’t forget to check back for the latest gaming news and information.