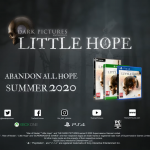 You are reading
Little Hope Arrives This Summer

It wasn’t long ago that the first of The Dark Pictures Anthology, Man of Medan, was just being talked about and played by fans. Now the second game of the series, Little Hope, is making it’s way to Xbox One, Ps4, and PC this summer. The Dark Pictures Anthology is developed by Supermassive Studios, the creators of the PlayStation exclusive Until Dawn and published by Bandai Namco. Little Hope will continue this cinematic horror series with what looks to be a very intriguing story. The first title Man of Medan is already available if you are looking to start from the beginning of the series.

There are very few studios who pull off games with drastic choices that affect how the game plays out. So if you want some characters to live through the tale, you better be careful. You also might just recognize some of the actors and actresses as well! Check out the trailer announced from the official Twitter account.

What happens in the past, never stays buried. Your tour of #LittleHope begins this summer.
#TheDarkPictures pic.twitter.com/qg0MJRHIq4