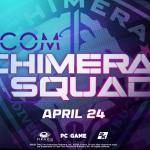 Time To Get Messy

It’s about time another game showed up. XCOM: Chimera Squad gets a surprise announcement on social media and it’s heading over to Steam on April 24th. Most gamers know of the XCOM series, but for those that don’t here is a short breakdown XCOM is a turn-based sci-fi action strategy game that relies heavily on rolls, cover and the environment for combat. You have to be very careful about where you move your characters, what actions you take and who you attack. The consequences could be dire if a simple mistake is made, and never trust the percentages! The series has received high praise through the years and has built a very large fan following. Check out the announcement trailer below for this new title.

Welcome to City 31. Humans, aliens and hybrids now live together in a fragile post-war peace but conspiracy groups threaten to upend it all. You must stop them in XCOM: Chimera Squad, a new combat experience in the XCOM universe.

XCOM: Chimera Squad looks like it will be another great iteration into the franchise. Welcome to city 31, five years after the events of XCOM 2. Your squad is comprised of both humans and aliens, and your success could mean the difference between peace and war. XCOM: Chimera Squad introduces new modes and gameplay, such as Breach Mode and a good amount of other options. This is just one thing among a few other smaller additions that make this experience different than the games from before. You can check out a full gameplay breakdown in the video below.

XCOM: Chimera Squad makes it’s way to Steam on April 24th, and it’s only $10 US / $15 CDN. For a new game at such a cheap price, it’s easy to say this is a steal of a game. It probably also means it won’t be a very long one, but from the gameplay trailer, it will be completely worth it.