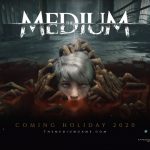 You are reading
Inside Xbox: The Medium Announced

The Medium takes place in Kraków, Poland. The titular Medium has the ability to see the spirit world which reflects the emotions of the characters in the world. Thanks to the power of the Xbox Series X there will be no load screens when shifting between the two worlds. Acclaimed composer Akira Yamaoka, the visionary mind behind the Silent Hill series will be providing the music for the game. The Medium will launch on Xbox Series X and Xbox Game Pass later this year.