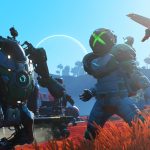 Many of you are just now jumping right into Minecraft Dungeons thanks to Xbox Game Pass. Players will be getting a huge hit title in June to add to the already growing library of games. No Mans Sky will be coming to the service in June.

It was announced today by Sean Murray of Hello Games that No Mans Sky would be joining Xbox Game Pass next month. However there is currently no specific date on when it will be joining the service. Players will also be able to enjoy a Windows 10 version of the game. Sean Murray had this to say about bringing the game to Xbox Game Pass.

“It seems like a natural and timely step to announce today that next month, No Man’s Sky will come to Xbox Game Pass. Opening up our universe of possibilities to over 10 million Xbox Game Pass members who are just about to start their journey with us.”

Players will be able to enjoy some of the best sci-fi action in a game. With the other eight free updates that brought players closer together and allowed them to create their own living ship. No Mans Sky is really just beginning to show how great the game can be. Take a look at the trailer below for the April update that added Exo Mechs to the game. June’s Games With Gold have been announced. How do you feel about the games being added to it?