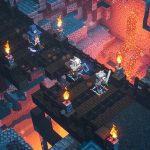 Minecraft Dungeons is a brave new step for Mojang and the Minecraft franchise. A bit of a step out into left-field though, so to speak. For a franchise who knew the action RPG genre would work so well. Developed by Mojang Studios, Double Eleven Studios, and published by Xbox Game Studios, Minecraft Dungeons sets a new humble beginning for the studio as they dive into unknown waters. Luckily enough, it worked! Quick note, thanks to Microsoft and Xbox for providing a code for review purposes. Minecraft Dungeons was reviewed on PC. The game is set to launch on all platforms. Xbox, PlayStation, PC, and the Nintendo Switch on Tuesday May 26th.

Disclaimer: There are spoilers ahead!

Minecraft Dungeons doesn’t have this large, complex storyline. It’s simple, fun, and overall a tad bit cute. You, the adventurer and your pals, set off in a quest to stop the evil Arch-Illiger! With his army of minions and corrupted illigers, the Arch-Illiger has set off on a conquest of vengeance. He’s just this innocent little guy… the Orb of Corruption has, well, corrupted him! All he wanted was to be friends with the other illigers, but no. The illigers had other ideas and cast him out. Now, look at what happened! This is why you should be nice to people.

Anyways, as you set out to defeat the Arch-Illiger and his army, you traverse through roughly 10 missions. Each representing a unique biome from Minecraft, such as the Swamp, Desert, and Mushroom biomes. The overall size of each mission is substantial enough to keep players going for about 10-15 minutes, which for a game like this is a good amount. Each mission has its own set of rewards, providing players options of what gear they want to farm without having to figure out exactly where to go on their own. 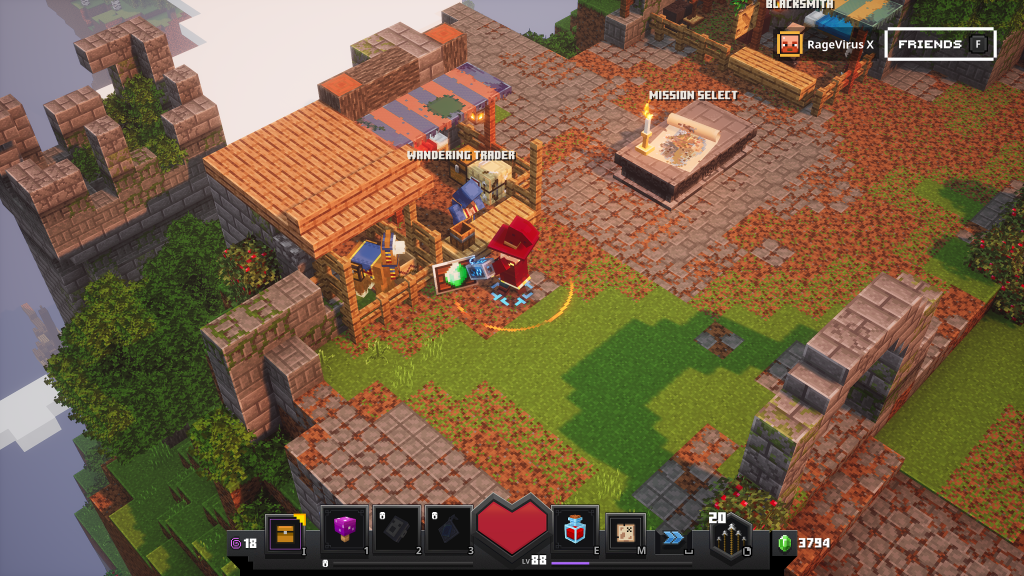 Each mission also provides a nice additional story tidbit. Giving you a quick reminder as to why you are at that specific location, and the mission you are about to set out on. It provides a nice flow throughout the game, especially when you make a quick stop back in camp after each mission as well. Toss in three full difficulty levels that are unlocked once you beat the game the first and second time, there is enough of a reason to keep playing for a while. Oh, and there are secret levels too. An especially hilarious and fantastic one that Diablo fans will get a kick out of.

Minecraft Dungeons has probably set the perfect foundation for future titles and content. The combat is simple enough to just pick up and go, which makes it very easy for anyone to play. Not having to rely on class-bound characters was a great way to simplify the combat but still allow it to be fun. You can melee, use your bow or artifacts to help combat the nefarious evil army! Artifacts are items that you can equip to a three-slot bar on your character, and they provide some sweet abilities and spells. All three aspects of combat easily go hand-in-hand, making it simple yet robust. There’s more to Minecraft Dungeons than simple combat though.

The armor and weapons you obtain throughout the game are quite interesting. There’s enough variety out there, that if you wanted to focus on a specific build type, you can. What I mean by that, is you can focus on either being a super tanky character that draws enemies or an archer that sits back with an explosive crossbow. You could also be a fast-hitting DPS (damage per second) character that melts enemies. The amount of combat variety you can experience in gameplay is quite impressive, albeit it’s not as deep as Diablo, which is fine. What makes this work so well for Minecraft Dungeons is the usage of enchantments.

Enchantments are attributes that are tied to your armor and weapons. These provide some fantastic ways to focus on how you want to deal with your enemies. As mentioned earlier, this is where you can focus on your build. You can turn a simple bow into one that sends out a scattershot arrow at the point of impact, carrying fuse-ready bombs that detonate in a large area with a poison cloud. This is just a small example of what you can obtain. This allows for a good amount of depth into Minecraft Dungeons, and it’s a ton of fun. Even though the combat is simple with some depth to it, there almost feels like there was some hesitation. Artifacts could’ve been a beneficiary with enchantments, as well as maybe providing an option to reallocate your points spent. 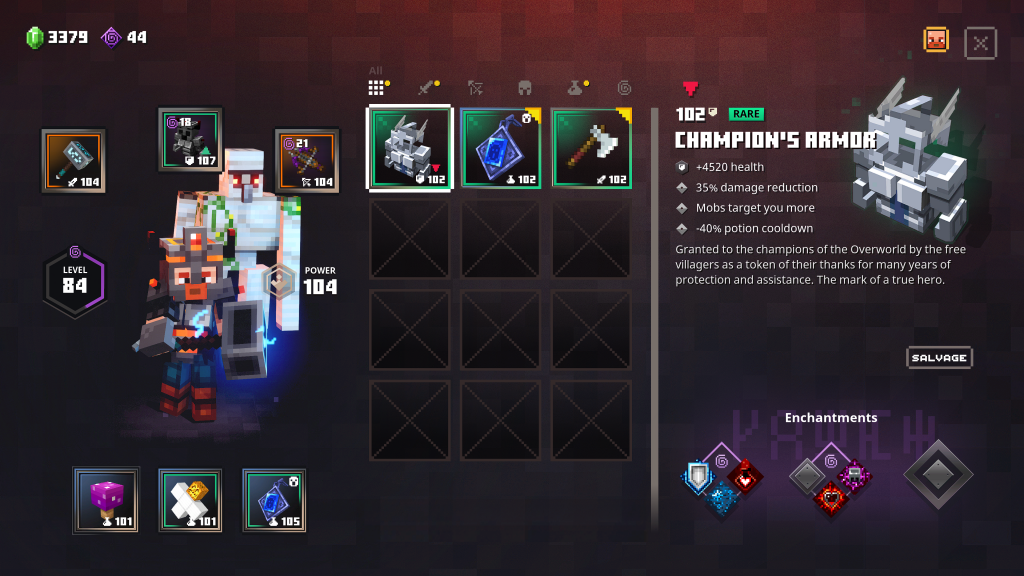 Each time you level up you gain an enchantment point. When you use these points on an item, they end up being bound to that item. That means once you use your points on an enchantment, you cannot get them refunded. Unless you want to salvage the item, so spend them wisely. There are three slots for enchantments, with up to three options per slot. Each option can be subsequently upgraded three times. In all honesty, though, having your points locked to these items without a refundable option is fine. You’ll end up switching through more items than you think, and will be salvaging a ton of them.

Combine this bit of combat depth with quite a few levels that have good replay value, you can have yourself a ton of fun for a good amount of time. There’s always a large number of enemies to encounter, keeping you engaged almost the entire time you are on a level. There is a good amount of enemy variety to watch out for. This is including special mob groups, like the ones you see is Diablo that has special buff attributes. They don’t usually drop anything worthwhile for loot, more of just a pain in the butt to deal with. Most of the good loot that was encountered have primarily been from loot chests or the bosses themselves. 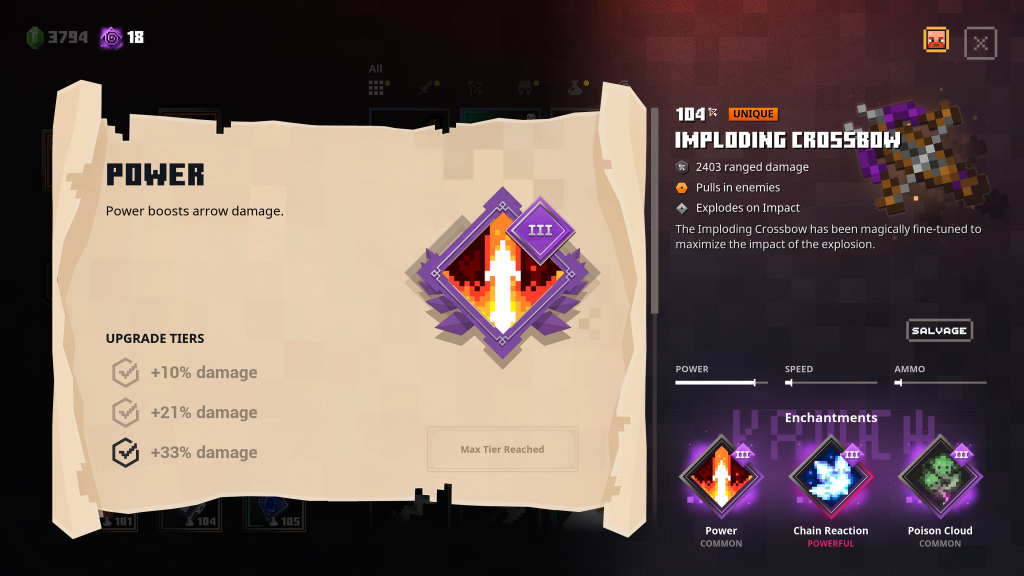 Minecraft Dungeons in terms of performance during gameplay was great. It ran well at 60 frames per second at 4K on PC. Unfortunately some minor bugs were encountered. There were a few occasions where your pet could end up continually falling through the ground until you move around or get to a different elevation. There is also a level that features jump pads… and those sometimes were not fun to deal with. Getting stuck mid-air or on a ledge without being able to move happened more than once. It would take a bit to try to get moving again… but sometimes dying or backing out of the level was the only way to fix the issue.

Minecraft being Minecraft, they needed to stick with the legendary art style of the franchise. Even though it’s a pixel block look, it works so well with the game. It’s a cute aesthetic that everyone can get to love. A family-friendly environment. All of the levels in Minecraft Dungeons look great, and stand out on their own. There were a few times where you can look at the environment you are playing through, and go “Hey, this kinda feels like a Diablo level”. This is a mark that you know the developers took inspiration from the Diablo series. Why waste what works!

Never have I ever heard so many zombie growls or creeper explosions in my life. The creature growls, oofs and grunts immediately reinforce the Minecraft feel. None of the audio seemed off or out of place. The music sets the tone well and the combat sounds like it has some power to it. There isn’t too much to expand on here though. The music, creature sounds, combat, the whole package sets a nice stage for players to enjoy.

With Minecraft, there has to be a multiplayer option. Thankfully you can play with up to four friends, or go solo if you wish to do so. Currently you can only play with people on the same platform, but crossplay will be added at some point after launch. Hopefully, this is soon, because having a large fanbase on all platforms and allowing them to play together as soon as possible will be a big factor in its success. If you want you can also play couch co-op with a partner. Just simply plug in another controller and away you go!

Online is fairly steady, though that always factors on someone’s bandwidth/connection strength and the servers. One great aspect of Minecraft Dungeons multiplayer, is that loot is bound to the person. That means if it’s highlighted in your corresponding color, it’s all yours. No one else can run and try to steal your loot.

Minecraft Dungeons is Diablo‘s baby brother. It’s not as in-depth, or as intricate as Diablo, but it’s a great first step into the ARPG space. The Minecraft aesthetic works well for visuals, but it’s also helped immensely by the gameplay. There is a large amount of replayability, with levels being somewhat randomized depending on the one you select. Some are more set in stone for layouts to make sure the story for Minecraft Dungeons is portrayed properly in the environment. Unfortunately this makes some of the other levels more appealing for replayability. The combat is diverse, simple, and fun with a wide variety of enemies to encounter. Good audio helps set the tone of the game and helps put the player into the Minecraft universe. Combine all of this with a solid multiplayer function and you have a recipe for success.

In some areas it does feel like the game could be expanded on a little bit more though. Some examples are, provide an option for refundable enchantment points or an advance stat tracker for the hardcore players. Storage for players wanting to horde their special items would also be a great asset. Most importantly, cross-progression should be enabled. With crossplay you will have people playing a ton together. Providing an option where people can take their hours of progression with them if they choose to play on another platform for a day, is important. In the end, Minecraft Dungeons is a bold new step for the franchise, and a good one. This could be the start of another massive Minecraft hit.