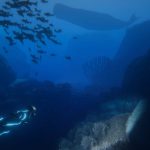 You are reading
Beyond Blue Review: An Underwater “Walking” Simulator

Beyond Blue sits in an interesting place in video games, documentaries, and activism. The game is a narrative-driven adventure title that puts you in the heart of the Pacific Ocean. Developers E-Line Media said the game takes inspiration from the BBC’s Blue Planet II documentary. Does Beyond Blue float or sink? Check out the full review below. 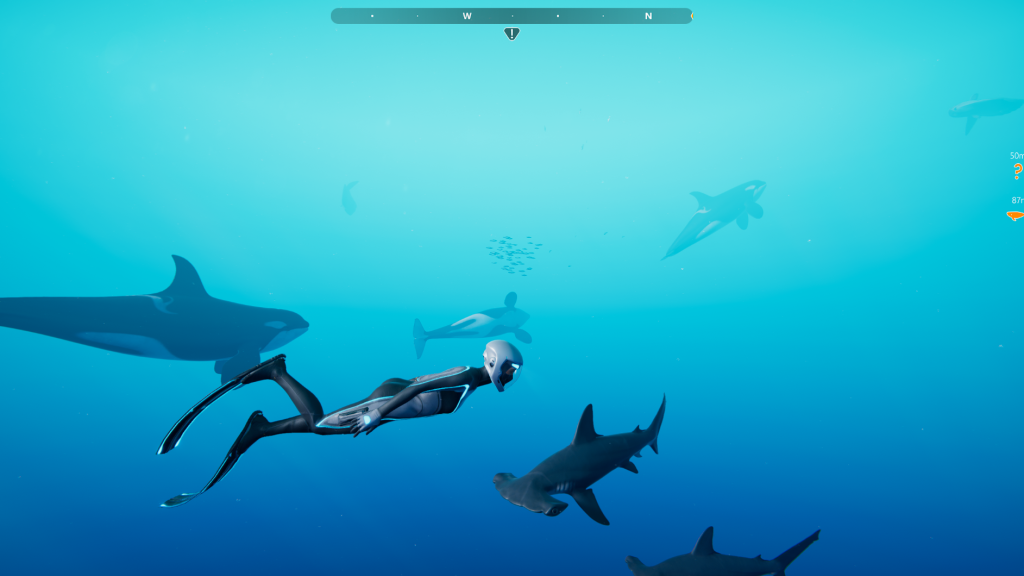 Set in the near future, Beyond Blue takes place in the Western Pacific and follows an OceanX team deployed in the Pacific Ocean. Players take control of Mirai, a young deep-sea explorer and marine scientist infatuated with studying whales. Alongside her are André and Irina who support Mirai as she dives deep into the ocean. It’s worth noting that OceanX is a real-life ocean exploration initiative and produce the same live-streaming content as Beyond Blue depicts.

Throughout the game, Mirai’s journey takes her deeper below the mesmerizing waters of the Western Pacific Ocean. The team is tasked with following a pod (or family) of sperm whales in order to study their songs. During dives, Mirai can research other creatures that interest her teammates. For instance, scanning sea turtle piques Andre’s attention open up more about his softer side from his rough exterior. Whereas, Irina is more taken with giant squids. The teammates even come up with their own inside joke about an octopus that repeatedly shows up on different levels. 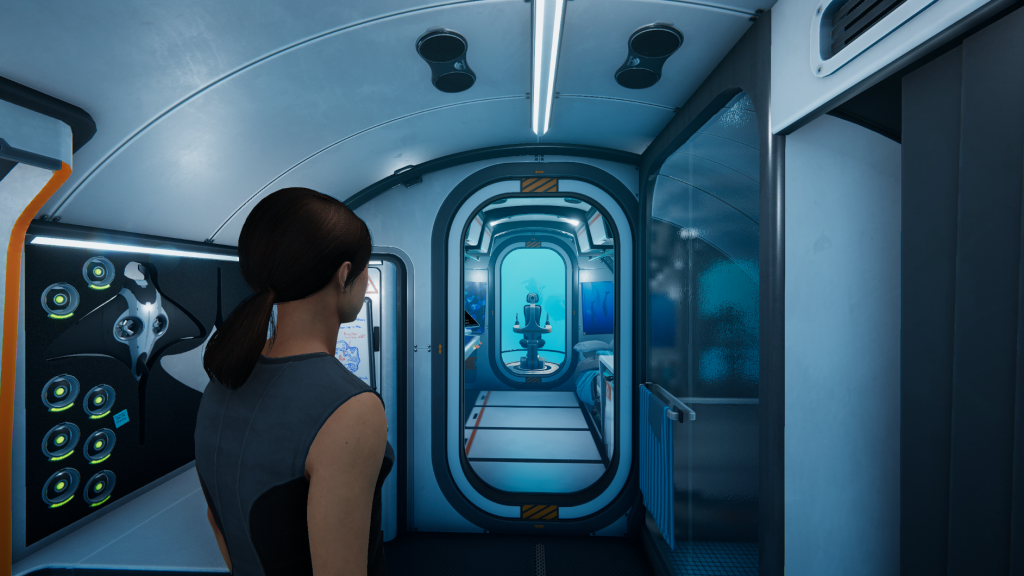 Conversely, in between each dive, Mirai returns back to her decked out submarine. Here, she can play audio messages left by her teammates and her sister Ren. These calls and messages are the main mechanisms that relay the game’s main narrative and the protagonist’s personal story.

The sub allows Mirai to catch up with André and Irina about their research progress. Scanning the previously mentioned creatures opens up new dialogue with teammates that makes for endearing conversations. Likewise, Mirai’s personal story is depicted through Ren. The latter dropped out of university for some time and is now looking after their dementia-stricken grandmother. Ren recently resumed her studies, but that’s a testy subject between the sisters.

These conversations add intimacy to the protagonist and shed some light on her personal life outside the ocean. It’s during these segments where the game’s dialogue truly shines since conversations are a lot more personable and really flesh out the characters. Quick sarcastic quips and brief moments of tension are found during the “drier” submarine section of the game, no pun intended.

However, by the end of Beyond Blue, I felt that the main narrative wasn’t as strongly written as Mirai’s relationships with her teammates and sister were. As a “walking simulator” the main storyline is a key factor to keep players engaged. While the main narrative wasn’t poorly written or suffered any gaping plot holes, it didn’t leave the same lasting impression as the conversations in the submarine sections.

Beyond Blue is described as an adventure game that plays more like a “walking simulator”. The basic game loop is as follows. Mirai begins a dive by traveling to a buoy and scans for different creatures and/or anomalies from afar. The buoy reveals waypoints that players must travel to. Mirai can scan various ocean wildlife along the way. The more you scan the animals the more information players unlock in the scan log available in the submarine.

Once you reach your destination, players then proceed to scan the animal or object of interest via the zoom scan feature from a futuristic-looking manta ray drone. Then its rinse and repeat until the loop breaks up during submarine sections.

However, unlike other walking simulators, there are no puzzles or threats to break up progress. Beyond Blue heavily relies on scanning mechanics via the manta ray drone as the game’s main interactive element. Scanning more oceanic wildlife unlocks live-action documentary-style “insights” that can be accessed in the submarine section or the main menu.

Each insight clip is a few minutes long and is an interview with real-life marine biologists, scientists, and experts. It’s here that the game presents its educational and activist aspect. The insights clips that are well produced and quite informative. 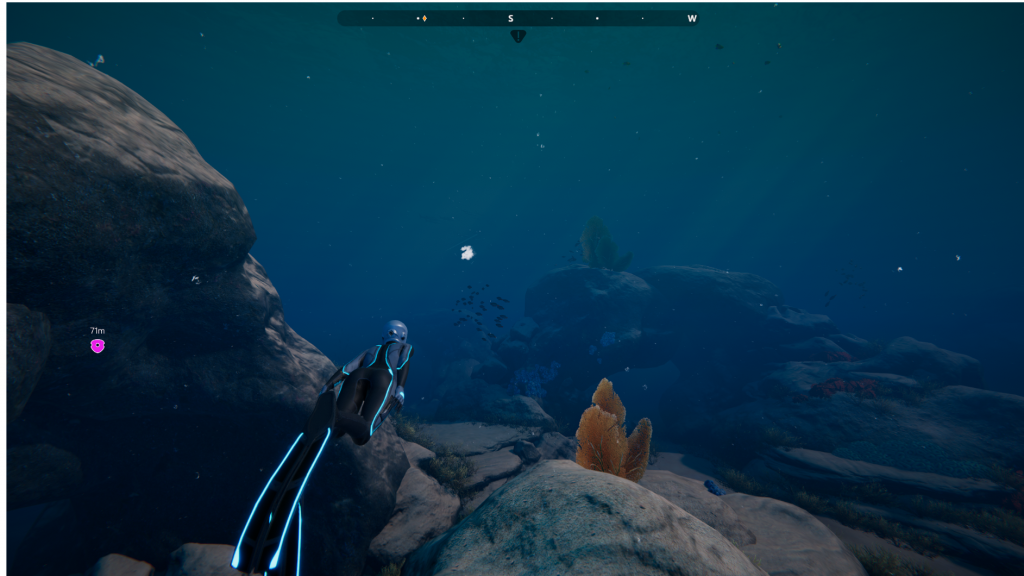 The swimming controls are tight and responsive. There’s no awkwardness when it comes to the diving animations. Diving motions are all smooth and appear accurately represented. However, drone scanning sequences can be tricky. Panning along a creature can be a chore as camera angles make reaching specific points a test of one’s dexterity.

Additionally, the lack of any threat in the game further reinforces the game’s goal of being educational and does detract its “fun factor”. Beyond Blue never tests its players or places any challenges. Even other walking simulators will have a few puzzles to keep players engaged. This diminished my overall enjoyment as without any kind of obstacle it really felt like the game didn’t need to be a game at all.

Overall, Beyond Blue takes less than 3 hours to complete. Once finished, players can “free roam” different dive zones from the game to unlock all the scan logs by scanning every animal dozens of times. However, unless you’re a strict completionist, there’s very little reason to revisit these dive zones. 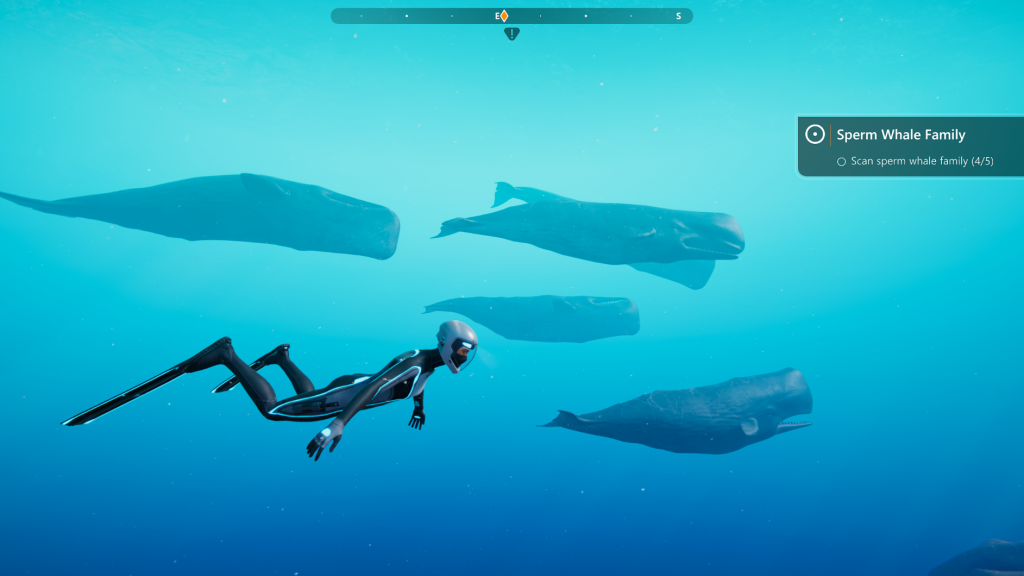 Beyond Blue features simplistic, yet captivating graphics. The underwater environment is both realistically and beautifully depicted. The ocean floor bed and biodiversity are convincingly recreated and add to the game’s immersion. Creatures such as hammerheads, sea turtles, and even the mysterious Atlantic football fish are authentically replicated.

E-line Media partnered with BBC Studios and OceanX to recreate Beyond Blue’s underwater environment. Their content and data provided the developers with the inspiration they needed to recreate the underwater wonder that is the Western Pacific Ocean. However, Beyond Blue’s graphics suffer from both repetitive scenery and creatures. Despite, Mirai traversing deeper beneath the surface, there’s little to differentiate between each dive besides “darker” waters.

Although there’s a large breadth of different animal types found in the game, their reappearances get old quite fast. The first time you spot dolphins and humpback whales is enthralling. But, by the third dive, these magnificent and mysterious creatures fade to the background.

One of Beyond Blue’s strongest point is its audio. Like the game’s graphics, there are incredible attention-to-details in the sound effect department as well. Sperm whale’s song and echolocation reverberate beautifully during the diving segments. While the submarine’s bland décor springs to life when Mirai turns on her diverse playlist really breaks the monotony from dives. The soundtrack includes Miles Davis, the Flaming Lips, The Edisons, and they truly reflect the protagonist’s personality.

Beyond Blue sports an impressive cast of voice actors. Anna Akana (YouTube), Mira Furlan (Lost, Babylon 5), Hakeem Kae-Kazim (Black Sails, Hotel Rwanda), and Ally Maki (Toy Story 4) bring the game’s characters to life. Their performances are by far some of the standout aspects of the game. There’s natural chemistry depicted in the dialogue sequences that are top-notch. In some instances, I would find myself rushing through a diving segment just to return to the sub in order to hear the banter between the teammates or learn more about Mirai’s personal story.

Make no mistake, Beyond Blue is a walking simulator under the ocean and many of its design decisions reflect that. It purports itself as an educational game, that’s evident throughout the experience. Gameplay comes second to the narrative as it strives to be the main pull for players.

Beyond Blue is a quick experience, totaling less than 3 hours to complete. The main narrative wasn’t as strongly realized as the side content such as the teammates’ interactions or Mirai’s personal story.  But the repetitive game loop that overemphasizes scanning creatures and items loses its shine very quickly.

While the game definitely nails down diving mechanics, but it doesn’t convey the same ocean feeling as other diving games have done previously. Titles such as Subnautica and Abzu better depicted the ocean’s sense of environmental mystery and expansiveness than Beyond Blue. But again, that wasn’t the point of the game. When it comes to the educational portion of Beyond Blue, the game accomplished this goal if you watch the insight clips. However, your mileage may vary, because players can easily skip watching the insight clips alltogether.

In the end, Beyond Blue is graphically beautiful and its audio is immersive, yet, even these factors can’t detract from the dull gameplay loop. But for the MSRP $19.99, it’s definitely worth admission, especially to those interested in nature documentaries. Beyond Blue is available on Steam, Apple Arcade, Xbox One, and PlayStation 4.