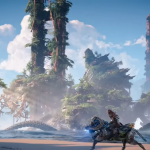 You are reading
Horizon: Forbidden West Announced for PS5

Aloy scales cliffs, rides machines, and fights with a bow for much of Forbidden West’s trailer, much like Zero Dawn. More importantly, Forbidden West features many new locations, machines, and skills. These locations included beaches and a swamp. In the swamp, Aloy accidentally awakens a turtle machine, and later prepares to fight a war elephant machine. Along with these action-focused sequences, Aloy also dives through the water with a new breathing apparatus. Aloy narrates the entire trailer, strongly stating her desire to protect this world from grave oncoming danger. Meanwhile, Sylvens, a supporting character from Zero Dawn, appeared with corrupted machines.

Horizon Zero Dawn was a PS4 exclusive title in 2017 which received critical and commercial acclaim. As of early 2019, it has sold over 10 million copies and is widely considered one of the PS4’s strongest titles. Guerilla Games, best known for the Killzone series, developed the Decima game engine for Zero Dawn, which 2019 PS4 exclusive, Death Stranding, also used. Further, more than 70 Zero Dawn team members worked on Death Stranding. To thank Guerilla’s influence, there is a Tallneck Easter Egg in Death Stranding.

Horizon Forbidden West did not get a release window but Guerilla Games asked viewers to stay tuned for future updates.