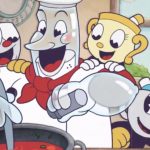 You are reading
Cuphead Has Appeared On The PlayStation Store

Cuphead originally released on Xbox One and PC back in late 2017. The game was a highlight in a very average year for the Xbox ecosystem. It was a fresh take on the run and gun side-scrolling genre. Combining 1930s cartoon aesthetics with smooth and challenging gameplay, the game quickly developed a devoted fanbase. Since then the game released on Nintendo Switch in April of 2019 and was a huge seller on the E-shop. Now with a new listing on the PlayStation Store, it appears PlayStation owner might be able to experience the game very soon.

Twitter account Wario64 who has gained notoriety for his sharing of various gaming deals, news, and rumors posted a screengrab that is worth paying attention to. In this screenshot, it shows Cuphead on the PlayStation store. He notes that while the image is uploaded to the store, currently the game has no store page at this time. However, it feels like only a matter of time before we get an announcement if the game is coming to PlayStation. In an interesting note, it has also been a while since we have heard any information about Cuphead’s upcoming expansion “The Delicious Last Course”. Hopefully, more information will be revealed in the coming days in regards to both.

Cuphead may be coming to PS4, it's appearing on international PSN stores right now but game listing doesn't load yet pic.twitter.com/ME7oRLkSEM

Will you pick up Cuphead on PlayStation 4? Let us know in the comments and don’t forget to check back for the latest gaming news and information.

Battlefield 2042 Multiplayer Focus is Too Much