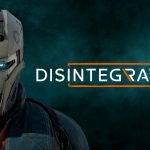 You are reading
Disinterested in Disintegration

Disintegration from VI Interactive is billed as a hybrid first-person shooter and real-time strategy game. The studio is new, but the pedigree of the founder, Marcus Lehto, stretches back to the original Halo. In many ways, the game feels like a throwback straight from the glory days of the Xbox 360 era. It’s experimental sci-fi with a truly unique idea of the future. Unfortunately, it ends up being far too much Dark Void and too little Mass Effect.

We played Disintegration on PC and the developer provided a review code for the game.

Disintegration begins in the middle of a prison break from the Iron Cloud, a massive ring-shaped structure floating a mile above the Earth. The game provides little context for who you are, why a sinister robot called Black Shuck is threatening you, or what the significance is of the events you are witnessing. By the end of the first mission, you have assembled a ragtag group of Outlaws to fight back against the Rayonne, the regime that operates the Iron Cloud.

Beginning a story in media res is not a bad thing. Not addressing these threads is a problem though. Romer, your character, is a racing pilot, but his backstory beyond that is nonexistent. Black Shuck is a paper-thin villain with a look torn straight from the Decepticon manual. Surprisingly, your team members actually have quite good voice acting. Though most of their interesting dialogue is sparse and usually comes outside of missions. Meanwhile, the story asks philosophical questions about being human. However, the game is uninterested in answering any of them. You are a rebel, but what you are rebelling against is never made clear.

This Game is Not Fun

Disintegration wants to blend the best aspects of first-person shooters with real-time strategy mechanics of giving orders to troops on the ground. The problem is that good first-person shooters rely on the player feeling like they are part of a battle. By placing the player in the grav-cycle, a flying vehicle with two weapons, they rob the player of any real feelings of immediacy or adrenaline. Even when you are on your last metaphorical limb, you never truly feel threatened. A last-second escape behind cover is accompanied by the same cold distance that accompanies most real-time strategy games. It makes tension very hard to come by.

Despite the direct control you have over Romer, he ends up feeling like just another unit you are commanding. There is no moment of a perfect headshot or feeling of elation and triumph defeating a boss. Every enemy feels like a bullet sponge outside of the heavy mechs you fight. The standard soldiers are an inconvenience more than a threat. Still, we have been killing run-of-the-mill enemies in Call of Duty and Borderlands for decades. The developer forgot to make this part fun, and that comes down to their lack of trust in the player when it comes to the grav-cycle.

The grav-cycle as an idea is good in principle. It lets the player hover above a battlefield and maneuver (very slowly) to places that would be difficult on foot. However, in execution, the developer hamstrings the player at every turn. Weapon load-outs are fixed for each level. In other words, the marksmen rifle that I actually liked and brought me close to the action was only usable for a single mission. The weapons they do provide also aren’t always those best suited for the mission. The final mission has you going up against flying enemy grav-cycles and large bosses. So then why am I stuck with machine-gun pistols doing chip damage? Very few weapons feel satisfying to use, or feel like they have real weight against your opponents since they don’t react to being hit.

Secondary weapons oftentimes include a healing ability, which is great, except for all the missions when the healing ability can only be used on your allies, not on yourself. Your allies die infrequently and reviving them is as simple as running over their corpse to initiate the respawn. The game offers no incentive to heal them though, so it feels like a waste of a weapon slot. This is accompanied by a miserable checkpoint system. The end result of these factors is redoing long stretches of a mission without adequate means of regaining health. The health recharge will only bring you to slightly less than a quarter health. Which means long stretches of hiding, shoot, and more hiding, almost like a poorly designed cover shooter. Unless, you can rely upon your commanded units, which you can’t.

An RTS By Any Other Name

Aside from the grav-cycle, the other major gameplay hook in Disintegration is the units that you can command during missions. You typically have between two and four companions on a given mission, each with their own special attack. Functionally, these units act like special rechargeable abilities since the AI is lackluster in tracking and assaulting targets. This is especially annoying when dealing with any of the larger enemy types. Companion attacks can be focused on a specific enemy which, to their credit, results in a quick dispatch of your chosen foe, but requires a tedious about of babysiting.

Similar to your weapons load-out, you are also unable to choose which companions to bring with you on a mission. This occasionally is for story reasons, but other times it leaves you with units whose abilities aren’t nearly as useful. Some abilities like stasis field and missile barrage feel fantastic when used to perform satisfying combos. While others, like concussion grenades, feel dramatically underpowered.

Disintegration consistently forgets or neglects the ‘strategy’ part of real-time strategy. By limiting the grav-cycle’s hover height to about thirty feet, players are never able to get a full grasp of the battlefield. Hovering anywhere close to that height is also a surefire way to be instantaneously blown out of the sky. The game places restrictions on how far away you can direct the units, whether that be to take an objective, or focus on an enemy or direct them to a position. This only further limits your ability to utilize them. This is especially frustrating when going up against towers that eliminate the player’s ability to shoot. That’s right, in a first person shooter there are multiple levels where for periods of time you can’t fire your weapon. I can’t emphasize enough how not fun this is.

The story is fairly trite and underserved, rebels fighting a regime. Meanwhile, the premise of Disintegration, character design and voice acting are all fantastic. The game’s premise centers around the idea of placing human minds in robot bodies. The process was originally voluntary, and Romer was a spokesperson for the process. Somewhere along the way, it became compulsory. The rebellion is fighting for the right to return to their physical bodies. That is a compelling idea that could use some nuance that the game never provides.

The character design is pretty great for the Integrated characters and it’s a smart decision for a medium budget game to go with characters whose mouths don’t move by design. The game has a real 80s Transformers cartoon vibe. It is just a shame that we don’t get more personal interactions with them.  Especially since each of the voice actors are so unique and are clearly trying to bring as much personality as they can to the limited script. They do an exceptional job with what they have. Unfortunately, two lines of dialogue between missions just isn’t enough to get a real feel for the characters. The game’s score flows between minimalist and nonexistent. Long stretches of the game have no music at all. It’s an odd design choice to be sure.

Speaking of stakes, the game reaches a climax halfway through which leaves the remainder of the game feeling somewhat meandering. The penultimate mission leaves a massive plot hole that is never resolved dealing with Black Shuck. Disintegration leaves a final impression with is a shoulder shrug. A lack of personal drama makes the marquee moment of triumph muted at best. For a game that raises questions about reintegrating with humanity, the game never follows up on any of those aspirations.

Walking away from Disintegration, every aspect of the game feels baffling. It’s a first-person shooter where you never feel the heat of the battle. It’s a real-time strategy game that limits your ability to strategize beyond the current instant. It tells a story about longing to feel without any feelings attached. It is a game I didn’t want to return to while playing and can’t imagine ever doing so now that I’ve beaten it. In the end, Disintegration never amounted to more than an intriguing premise.