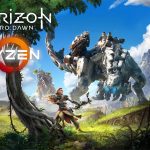 You are reading
Horizon Zero Dawn Comes To PC August 7

The long-awaited PC release for PlayStation’s Horizon Zero Dawn will drop on August 7, 2020.

In a surprise announcement, PlayStation-owned studio Guerrilla Games revealed Horizon Zero Dawn Complete Edition will release on PC on August 7. The game will be made available on Steam and the Epic Games Store. The studio unveiled a new trailer for the game as well, which can be seen below.

The PC-specific features include ultra-wide support, unlocked framerates, and more. A benchmark tool was also added to test out performance. Additionally, those who decide to purchase a particular Zen2 CPU may be eligible to snag a free copy of the game on PC. You can read more about that here. The Complete Edition includes the game’s expansion The Frozen Wilds, in-game items and a digital art book.

The release date for HZD comes some time after Guerrilla’s reveal for its sequel Horizon Forbidden West for PlayStation 5.