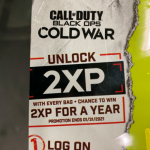 To say 2020 has been anything but a normal month in video games is an understatement. As we are less than 5 months away from the launch of next-generation hardware. People have begun talking about the big games that will be filling out the holiday season. From Cyberpunk 2077, Watch Dogs: Legion, Halo Infinite and Assassin’s Creed: Valhalla. There is one game that is missing from this conversation. Where is this year’s Call of Duty? Many have begun to wonder amid rumors and reports of development problems whether the game is coming this year? However, thanks to leaked promotional imaging, it appears Call of Duty is still on track to release this year.

As originally reported by Twitter account charlieintel which specifically deals with Call of Duty information and leaks. A piece of promotional material related to Doritos products has leaked showing the logo of the upcoming game. Simply titled Call of Duty: Black Ops Cold War, this appears to be the next installment in the long-running franchise. It is definitely weird to see promotional material for a game that has not been officially announced yet. However, it seems safe to assume that we won’t have to wait long to see the next Call of Duty. With a rumored PlayStation State of Play in August, with PlayStations long-running marketing deal with Activision. It feels almost guaranteed we will see the game at this event. Only time will tell.

Are you interested in the next installment of Call of Duty? Let us know in the comments and don’t forget to check back for the latest gaming news and information.