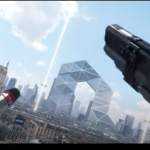 Fortnite, Apex Legends, and Call of Duty: Warzone continue to be dominating forces in the Battle Royale genre. While many games like Darwin Project, The Culling, and many more have failed. It is always a coin toss on whether the game will find an audience. Hyper Scape is the new futuristic battle royale from Ubisoft which looks to bring a new direction to the battle royale genre.

During today’s, Ubisoft Forward event, the brand new battle royale game Hyper Scape is hitting open beta. PC players will be able to go to the Uplay store and download the open beta for free and jump right into the action. Along with this announcement we got a brand new trailer. The trailer gives new players a look into what to expect from the new title. Console beta information will no doubt be coming soon.

You can join the official open beta here.

The game has received favorable previews and feedback from both media and influencers. The game was in a private technical test for the past few weeks. Now the general public can dive in and see what Hyper Scape is all about.

Will you be trying Hyper Scape? Let us know in the comments and don’t forget to check back for the latest gaming news and information.