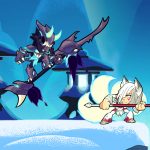 You are reading
Ubisoft Forward: Brawlhalla Coming to Mobile

During today’s first Ubisoft Forward event, Brawlhalla players had some great news announced. The game will be coming to mobile devices later this summer. This is one of the many stories that was announced during today’s event.

Brawlhalla will be coming to mobile devices on August 6th. You can register right now to be one of the first players to jump into this fighting game. Currently, players can join in on the Ben Ten crossover event. Remember this is a free-to-play game. Players can purchase the Battle Pass if they want to unlock other items. This is one of the many ways players can spend real money in Brawlhalla.

Brawl with over 40 million players across platforms in #Brawlhalla! Coming to Mobile August 6 register now 👇

It doesn’t matter what platform you play this game on, you’ll be able to play against everyone from PC to mobile. This is a great thing to see in current games. You can register right now for either Android or iOS devices.

Just click this link here and start your Brawlhalla journey. Some of the other news that was announced today was a look at the upcoming Watchdogs: Legion. Don’t forget to join the Hyper Scape beta that’s going on right now. Please bookmark lordsofgaming.net for more gaming and entertainment news.