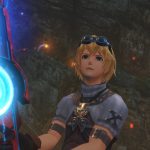 Nintendo’s Wii console was known for many things, and having great games was one of them. In a push to localize three unique titles – The Last Story, Pandora’s Tower, and Xenoblade Chronicles – fan-driven group Operation Rainfall fought for the Western releases of these games. And won. 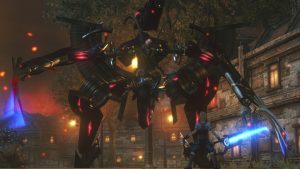 Xenoblade Chronicles: Definitive Edition is chock full of the JRPG jank from the early 2000’s – awkward silences between characters during dialogue, stiff animations, and dated 3D graphics. In other words, nearly every anime open-world game from Japan of that era. So what made Xenoblade different back then? Where some games in the genre were too stubborn to move on from archaic design, Xenoblade implemented modern-day conveniences. Saving at nearly point in the game and changing the time of day to tackle specific quests are a few examples. 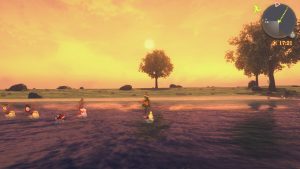 Game mechanics like ones I’ve mentioned are absolutely crucial to the design of Xenoblade Chronicles, a fully-explorable open-world RPG. Tackling stronger monsters in the open-world was fun, but I made sure to save before every encounter so that I didn’t have to waste time finding the enemy again. With the freedom to traverse its magnificent world, it created a new sense of immersion not seen in the genre before. Playing through XC once again reminded me how far open-world games have come. Back in 2011, games like Xenoblade Chronicles and Skyrim were the gold standard for the genre. Today, Xenoblade carries those strengths in spades. I always referred to it as one of the definitive JRPG experiences, and I still do upon my replay of the definitive edition purely for its game design.

Bionis, Mechonis, and the Monado

The story’s premise is simple: Two titans, Bionis and Mechonis, defeat each other in an epic battle. Thousands of years later, a multitude of races inhabit the dead titans, each side harboring a growing feud for the other. On Bionis, a tragedy befalls upon Shulk, our main character, in his quiet hometown of Colony 9 thanks to enemies from Mechonis. With the ability to wield the Monado, a sword that gives Shulk the ability to see visions of the future, he sets out to get revenge against those same enemies. 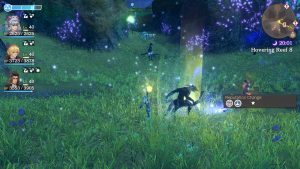 While JRPGs usually take six to ten hours setting up its plot and characters, Xenoblade goes full throttle in the first three hours. The face-value of the story is humans vs. mechs, but it goes deeper than that. Xenoblade Chronicles tackles themes like inner-strength, revenge, perspective and fate. Even if the writing shows its age at times, there’s more than enough here to keep anyone engaged for the full ride.

As soon as Shulk and his longtime friend Reyn set off, the game gives you full reign to venture around Bionis. Of course, you’ll be adding new members to your party along the way. You’ll also meet others that will round out the cast to be a charming and fun group.

The World of Xenoblade

Locations in XC are expansive, creative, and colorful. For 100 hours, you’ll scour unique lands, that hybridize science fiction and fantasy, filled with creatures that look like dinosaurs, flying whales and even mech-based enemies. Each area is riddled with unlockable side quests and landmarks as you fill in sections of the map. It’s a world you can easily immerse yourself in as you peak around every corner while an incredible soundtrack plays in the background. Exploring it was undoubtedly my favorite part of the entire journey. Your curiosity is rewarded, whether it’s a secret location found, gained experience points, or more loot. 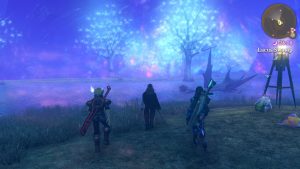 For those looking for impactful side quests similar to Skyrim, you won’t find them in Xenoblade Chronicles. However, this lack of meaningful attention to side content shouldn’t be considered useless here. While nearly all are fetch quests and monster hunts, they are there to compliment how often and how much you explore. Side quests in XC are truly there to serve exploration; not the other way around. In Skyrim, the quality of the side content rivals the main campaign, which can leave the main narrative to be unfinished. For Xenoblade, it’s the opposite – the story is the backbone for the entire game.

What makes the characters have a touch of originality, however, are their roles in battles. Without straying too far from conventional role-based team strategy gameplay, Xenoblade Chronicles inherits MMO-like qualities. Players will take into fights a hotbar of commands filled on a panel at the bottom of the screen. Characters on the field will auto-attack when near an enemy, but using your chosen commands will do more damage. Some commands are specific, like using Shulk’s Backslash attack does more damage if you activate it behind an enemy.

Shulk, Reyn and another early playable character fill as the standard damage dealer, tank and healer roles, respectively. Later other party members, like Dunban and Melia, will have more flexibility in their roles. For Dunban’s case, he’s an evasive tank, making him really effective for dealing damage while getting hit less (which is ideal for a tank). Melia is one of the more complicated characters to use since she specializes in magic that can deal damage, buff and heal. While that sounds nice, she also has the lowest amount of health in the party, making her a glass cannon to strong enemies. There are a lot of fun combinations to unravel the more you learn each characters’ strengths and weaknesses. 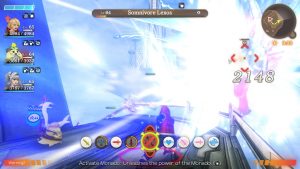 Since Shulk fights with the Monado, he can see into the future, and this does play into battles. Before an enemy makes a big strike, the player will get a vision of this attack and be given time to react. However, this mechanic turned out to be a bit obnoxious at times. In some story-driven fights, a boss would use fatal attacks frequently. making those visions appear more often and slow down the pace of battles. Nonetheless, it’s still one of the more unique and fun mechanics in any JRPG, so it wins points for originality and making it work.

To maximize on strategy, a blue bar can be filled to execute Chain Attacks, which can be used to disorientate enemies for big damage. In the end, it’s all about being prepared and making smart decisions to not get wiped. As for performance, there were moments of slowed framerate at particular gameplay points, like too many enemies on screen. Fortunately, no framerate dip was too drastic to ruin the experience. You will notice a hiccup or two though.

What the Definitive Edition Offers

So, what’s new in this version of the game besides the character model upgrades? Well, the definitive edition emphasizes ease of play with an overhaul on quest management and the user interface. Other features tailor to personal style, like switching between the remastered and original soundtracks or layering cosmetic outfits over your equipment builds. The rerelease includes Casual Mode, which makes battles easier. Expert Mode is also thrown in as well, offering a more specific style of RPG. Rather than gained experience points being automatically distributed to characters, experience is stored in Expert Mode. You can then grab from the pool of points and level up, or even de-level, one or two characters at a time. Time Attack Mode is another brand new set of fun challenges adding to replayability where you can earn more equipment and cosmetic items.

The biggest selling point for old fans is the Future Connected epilogue available as soon as you boot up the game. In the added content, a new area on Bionis has Shulk and Melia uncovering a mystery one year after the main game’s events. They’re joined by two new characters Nene and Kino, who fill in as the tank and healer. The battle system goes through a few changes that are spoiler territory, but it’s overall more of the same.

Sadly, environmental graphics in the rerelease seem to have no resolution bump. Everything, docked or undocked, looks as it did on the Wii. It’s clear the developers are due for a new game engine. 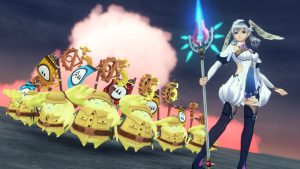 A Grievance on the Epilogue Future Connected

An important note to make is the two new AI party members, Nene and Kino, were just downright awful. This is surprising since in the Xenoblade Chronicles, party members are adept. Normally, taking on higher-leveled enemies was not a problem. I could rely on them to heal when needed or get the enemy’s attention. For Future Connected, Nene and Kino didn’t use their abilities efficiently.

Kino produced healing spells, but it was often too late or not on the person who needed to be healed. Nene was a less-than-favorable tank barely getting the enemy’s attention. At the end of the epilogue, I had a love-hate relationship for Nene and Kino. They’re fantastic additions to the short story because both have so much personality that shined. But the lack of a reliable AI made them frustrating to count on.

Future Connected ties up some loose ends from a story perspective and is just fine in terms of gameplay. It was fun exploring a new area in one of my favorite fantasy settings. However, the same tedious side quest structure leaves room for improvement. There are a couple of new music tracks as well, which was more than welcome. Future Connected is a great addition to an already stellar game.

Xenoblade Chronicles: Definitive Edition is a relic of the waning age of JRPGs. It tells a lengthy story of heroes that take on more than they bargained for in a genuinely interesting setting. The battle system is still fun to engage in even if the future-seeing element can be a bit obnoxious. My second time around was more nostalgic than a wonderful surprise. Nonetheless, I thoroughly enjoyed my time. Its imagination and refinements can’t escape some of its oddities, but the game is worthy of your time and money. Adding to the fact that you can take it with you anywhere, the game is a must-have for Switch owners.